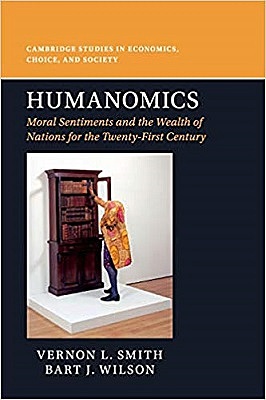 
Early economists made assumptions and built Utility Maximization models. The models worked. Clearly, the theory of Max-U was right. Then experimental economics came along, and the results of the experiments did not fit the predictions of the Max-U models. Maybe the design of the experiment was not right. Experimentalists tweaked the designs of the experiments. And still, the results did not fit the predictions of the model. So the experimentalists tweaked the model a bit. Perhaps the misprediction was because their specification of Max-U was not correct. Let’s correct the specification of Max-U. Let’s insert your utility in with my utility; let’s assume we have social preferences; let’s assume reciprocity. Now we can explain why “Frank” is willing to incur a cost to make “Evelyn” better off. But concentrating on Max-U, in whatever form it may take, means concentrating on outcomes. It means assuming what needs to be explained. It means offering a post hoc ergo propter hoc explanation that is not going to work for long.


Something has to give. What may have to give is Max-U itself. What if we do not maximize utility? What if we do not care about the payoffs as much as the path we took to get them? What if the context in which we got those payoffs matters more than the payoffs themselves? Would you accept $10 from me if you knew that that is the compensation for the work you did for me? What if you knew that I worked very hard to give that $10 to you as a gift? What if you knew I stole that $10 from a charity box? What matters is not just the outcome—you getting $10, but the context in which that outcome takes place. Better still, what matters is how we give meaning to the outcome given the context in which an outcome occurs. And that interpretation may depend on rules of conduct which we form over time, through the observation of the conduct of others and their reactions to our own. And so we have a paradigm shift: from utility maximization to humanomics.


Smith and Wilson rely heavily on Adam Smith in the definition of this new model of understanding of human conduct. It is impossible to ignore their reliance on Smithian language and texts to explain their experimental findings and their open and constant reminder that most of what they are saying was said earlier by Smith. But what is striking to me is that they are also Smithian in their method of analysis. And that is why I think this is (mostly) a book about learning.


“We are troubled and surprised when we find that something does not fit.”
Adam Smith wrote a “juvenile” essay that he spared from the flames that destroyed most of his unpublished works right before he died. This essay is titled: “The Principles which Lead and Direct Philosophical Enquiries; Illustrated by the History of Astronomy.” It is often referred to as “History of Astronomy” but it is actually about “philosophical enquiries”. Adam Smith explains how we build models (“systems”) to make sense of what we see around us. We are troubled and surprised when we find that something does not fit. Today we see that subjects in experiments give away more money than expected in Ultimatum Games, Dictator Games, Trust Games. We are surprised. Then, Adam Smith says, we wonder “What sort of a thing can that be?” How do we make sense of a result that doesn’t fit? “It stands alone and by itself in the imagination, and refuses to be grouped or confounded with any set of objects whatever.”2 What can we do? “Rather than it should stand quite by itself, he [the “philosopher” or scientist] will enlarge the precincts, if I may say so, of some species, in order to make room for it; or he will create a new species on purpose to receive it, and call it a Play of Nature, or give it some other appellation, under which he arranges all the oddities that he knows not what else do with.”3 Max-U expands and all the “oddities” of unpredicted experimental results are now grouped in “social preferences” or the like. When we have too many oddities to handle, we look for another way to systematize our observations. Adam Smith takes the passage from a Ptolemaic system, to a Copernican system, to a Newtonian system are illustrations of this systemization from the history of astronomy. The passage from Max-U to Humanomics is what Smith and Wilson propose in their book. “Because Ptolemaic Max-U treats Frank as an eccentric comet and Evelyn as a predictable planet in the economist’s solar system of preferences. Its representation of Max-U is devoid of the hidden forces of feeling that can explain both why Evelyns do what they do and Franks do what they do, but also why Evelyns often do what Franks do, and why Franks often do what Evelyns do.”4 The gravity that holds humans together is feelings.


The feelings they refer to are the Smithian feelings of gratitude and resentment. They allow us to develop “rule-following adaptation to learning from other social experience,”5 and to move from outcome-based models to models that understand circumstances and proper rules of conduct within them. In this sense Humanomics could be easily retitled “The principles which lead and direct philosophical enquiries; illustrated by the history of economics.” Early in the history of economics, models had more explanatory power than models developed later; this book represents a call for us to go back to the original models after a long detour.


I see Smith and Wilson writing with both the enthusiasm of curious children and the precision of experienced scientists. The book is captivating and well-written. It is accessible both to educated readers and to specialists. It is a must-read for anybody interested in social sciences.


For more on these topics, see the EconTalk podcast episodes Vernon Smith on Adam Smith and the Human Enterprise and more EconTalk episodes with Vernon Smith. See also “Vernon Smith, Economic Experiments, and the Visible Hand,” by Don Coursey. Library of Economics and Liberty, October 28, 2002.
Footnotes