Why does the Division of Labor Matter?

by Brianne Wolf for AdamSmithWorks 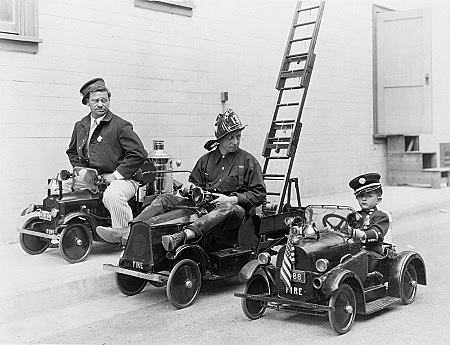 Smith begins An Inquiry into the Nature and Causes of the Wealth of Nations with the following claim: “The greatest improvement in the productive powers of labour, and the greater part of the skill, dexterity, and judgment with which it is any where directed, or applied, seem to have been the effects of the division of labour” (I.i.1).
Whenever I ask a student to read that sentence, I get blank stares when I ask the question back to them—why does the division of labor matter?
Sometimes, a brave student or two will provide an economists’ answer—productivity and efficiency!
Indeed this is part of his answer. Smith explains,

Those ten persons, therefore, could make among them upwards of forty-eight thousand pins in a day. Each person, therefore, making a tenth part of forty-eight thousand pins, might be considered as making four thousand eight hundred pins in a day. But if they had all wrought separately and independently, and without any of them having been educated to this peculiar business, they certainly could not each of them have made twenty, perhaps not one pin in a day; that is, certainly, not the two hundred and fortieth, perhaps not the four thousand eight hundredth part of what they are at present capable of performing, in consequence of a proper division and combination of their different operations (I.i.3).

The division of labor increases production and makes it more efficient by dividing the separate tasks of making an object among different individuals and thereby simplifying the job each person must perform. On the economic side of things, this innovation that Smith recognized helped spark the Industrial Revolution, and was a precursor to comparative advantage--David Ricardo’s economic concept about advantages in production among industries and nations. But for Smith and for us, the answer is so much more.
As part of Gen Z, the generation of side hustles and multitasking, my students should appreciate the division of labor more than most, and yet when I think about most of them, the marvel that is the division of labor—that we don’t have to make each and every thing we use in our daily lives from start to finish ourselves or pay the price for someone else to do this—is lost on them.
Have we achieved the division of labor to such an extent in the 21st century that it is no longer something at which to marvel?
Perhaps because I’m trained to think about breakthroughs in politics and economics, I think about the benefits of the division of labor often. For example, I’m always looking for ways to get out of my house chores. When I was young, this took the form of figuring out if I could use some shortcuts that Mom wouldn’t notice. Now that I’m grown and have a job, this takes the form of me searching for some kind of device that will make the mundane tasks of everyday life easier. The best invention, to this end, is my Roomba from iRobot. Instead of me spending time daily vacuuming up after my dog Lacy and all of her many messes, a machine does it for me. This frees me up for more reading, writing, or, even more Netflix-ing. For my students, the division of labor allows them to have time to pursue their passion projects, even to make things from scratch if they choose. Before the eighteenth century, making things from start to finish oneself wasn’t a choice and it certainly wouldn’t have been provenance for fame on Youtube . Making EVERY THING oneself from start to finish was a reality of daily life for most people in most places.  But the division of labor allows for more liberty. Smith tells the story of a little boy who, because of the division of labor, is inspired to make his small task in a factory easier. The division of labor encourages efficiency because each person works on one small task, is able to master it, and doesn’t have to constantly switch between tasks; but it also incentivizes each worker to make their particular job faster and easier.

In the first fire-engines, a boy was constantly employed to open and shut alternately the communication between the boiler and the cylinder, according as the piston either ascended or descended. One of those boys, who loved to play with his companions, observed that, by tying a string from the handle of the valve which opened this communication to another part of the machine, the valve would open and shut without his assistance, and leave him at liberty to divert himself with his play-fellows. One of the greatest improvements that has been made upon this machine, since it was first invented, was in this manner the discovery of a boy who wanted to save his own labour. (I.i.8)

It is not from the benevolence of the butcher, the brewer, or the baker, that we expect our dinner, but from their regard to their own interest. We address ourselves, not to their humanity but to their self-love, and never talk to them of our own necessities but of their advantages. (I.ii.2)

Smith makes this statement after asserting a fundamental characteristic of human nature that makes the division of labor possible—the human desire to truck, barter, and exchange. Dogs have no notion of trading one bone for another, but human beings constantly think about how to better their situation by working with others.
This statement about human nature is the second one Smith makes in his oeuvre. The first occurs in the first line of his first work, The Theory of Moral Sentiments:

How selfish soever man man be supposed there are evidently some principles in his nature, which interest him in the fortune of others, and render their happiness necessary to him, though he derives nothing from it except the pleasure of seeing it. (I.i.1.1)

For Smith, human nature can be characterized by two main qualities—the propensity to put ourselves in the shoes of others, the process of which he will call sympathy, and the urge to better our condition by exchanging with others. These two go hand in hand. We soon learn that we cannot exchange with others without putting ourselves in their shoes. Why? Because we wouldn’t know what to offer to get what we want from them. Money makes this somewhat easier, but the example I always use in class is kids trading bits of their lunch in secondary school. If you really want another kid’s pudding cup, you had better know what they like in order to get them to trade with you. If you offer leftover brussel sprouts, you probably won’t have any luck, but if you offer their favorite fruit or a different dessert you might fare better. For Smith, the division of labor built upon two natural propensities in human nature and in doing so created the possibility for greater efficiency, cheaper production, and more jobs. He also valued the division of labor for facilitating human cooperation and understanding on a mass scale. Indeed, one of the reasons why the division of labor is “the greatest improvement” is because it wasn’t anyone’s particular design or the invention of one mind. The division of labor depends on each individual’s self-love and trying to improve his or her condition, and in so doing, encourages human beings to take an interest in one another.
It also ensures jobs, social mobility, and invention for the least well-off in society. Smith puts it “But though they were very poor, and therefore but indifferently accommodated with the necessary machinery, they could, when they exerted themselves, make among them about twelve pounds of pins in a day.” He also notes that they can do this “without any of them having been educated to this peculiar business” (I.i.3). The division of labor allows individuals who aren’t well-off and haven’t had the benefits of an education to productively contribute to society and make a good living.
While many who seek to decry the promise of commerce cite the Smith who sounds like an early Marx in Book V of Wealth of Nations when he says that the division of labor can make people “as stupid and ignorant as it is possible for a human creature to become,” when introducing the concept, Smith actually associates the division of labor with innovation and liberty for the lowliest members of society. Recall the young boy who innovates because he wants “liberty” to play with his friends (V.i.f.50). The division of labor, then, is a double-edged sword. Is it really the greatest improvement in labor?
So when students ask me, why are we making such a big deal about the division of labor? I first say, everything you own, all that you’re able to do on a daily basis, all of the things you enjoy and the ease with which you enjoy them are because of the division of labor. The division of labor is also responsible for opening up jobs to many more individuals and helping to create the hockey stick effect of growth that the world has enjoyed since the Industrial Revolution. But more than that, the possibility for greater human cooperation, understanding of one another, and freedom is why Smith valued it as “the greatest improvement.”

Questions for Discussion:
1. Are the benefits of the division of labor primarily economic, moral, or some combination of both?


2. Do the benefits of the division of labor outweigh the downside that Smith acknowledges?
3. Should we be concerned that the boy who invents a more efficient machine so he can go play has effectively put himself out of work?

Well said. Also implied is the not understood concept of value. That might make a good discussion question too.