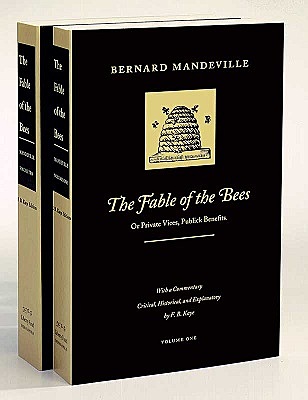 Adam Smith is generally a fairly calm writer. While his thought is innovative and exciting, his prose style is, in most cases, measured and professorial. When Smith deviates from this deliberate style, it is always worth making note of what has roused him to more fiery rhetoric.
One of the places where Smith’s language becomes most famously peppery is at the end of The Theory of Moral Sentiments in his discussion of Bernard Mandeville’s moral system. Mandeville, whose thought Smith calls “wholly pernicious” and “in almost every respect erroneous” argues that our private vices have public benefits. Our pursuit of vanity, lust, luxury, gluttony, and so on, pumps money into the market, and funds the production of goods and services that can address more saintly ends.
Mandeville isn’t wrong. Even Smith agrees with him, to some extent. Smith’s vision of an invisible hand that allows us to benefit one another through the market whether we intend to or not, isn’t really that far from Mandeville’s argument. Where they differ, of course, is in Smith’s much fuller vision of human nature. He sees humans as motivated by many different incentives--not just the indulgence of selfish desire. And Smith would never go so far, as Mandeville does, as to suggest that vice should be encouraged because it can be, in the long run, beneficial.
Smith believes that markets work whether we are good or bad people. The miracle of the market is that--no matter how bad we might be--our pursuit of our own interests benefits others. This truth does not, for Smith, mean that there’s no such thing as “good” or “bad.” Nor does it excuse us from working to become better people. For Mandeville, the appeal of the market is the way it forces good outcomes from bad behavior and the opportunity that presents for him to insist that, as a result, people who want good outcomes should actively encourage bad behavior. For Smith, the market is a miracle. For Mandeville, it’s a miracle...with a practical joke hiding in the middle.
Unsubtle readers of Smith often present his thinking as much closer to Mandeville’s than it really is. I strongly suspect that some of Smith’s outrage at Mandeville is protective. It is important that he differentiate his project from Mandeville’s. And surely Smith, who clearly cared deeply about learning to be a good person, was offended by Mandeville’s dismissal of that whole project as essentially unnecessary.
But I’ve always wondered if there was something I was missing. Smith isn’t a fool, and he’s well aware that much of the charm of Mandeville’s work lies in his “lively and humorous style.” (Though he does call it “coarse and rustic” as well.) That style, and Mandeville’s penchant for outrageous, ironic suggestions reminds me of no one so much as Jonathan Swift, whom Smith admired greatly. Smith’s admiring comments about Swift (see Lectures on Rhetoric and Belles Lettres #7-9) are mostly about the plainness and clarity of his style, however. He praises Swift most often as a clear moral writer than, as we do today, a great satirist. Even his praise for Swift’s “ridicule” focuses on the moderate and moral qualities of it:

...we find all his less serious works are wrote with a design to ridicule some one of the prevailing gay follies of his Time. They are chiefly levelled against Coxcombs, Beaus, Belles and other characters where gay follies rather than the graver ones pervail; these he never attacks in any of his works except the Tale of a tub which was wrote when he was very young and is a work of a very different sort of all the rest. ...As his morose temper directed him to make choice of the gayer follies of men to exercise his talent for ridicule, so the character of a plain man which he affected hindered him from ever making us laugh to excess...(LRBL #9, para 119)

And yet Smith had read Gulliver’s Travels!  One has to wonder what Swift would have made of Smith’s decision to praise his biting political and social satire because it is modestly levelled against mere “gay follies” and doesn’t make the reader laugh too hard.
Mandeville’s ridicule lacks Swift’s moral telos, so that is one ground for Smith’s dislike. And maybe Smith just doesn’t find Mandeville all that funny.
I wonder whether Smith had read Mandeville’s widely read, frequently reprinted, anonymously published (but everyone knew who wrote it) pamphlet, A Modest Defense of Publick Stews. Mandeville’s Defense is a raunchy, funny, satirical defense of publicly funded brothels as a way to discourage lust among the populace. As he puts it, “The only way to preserve Female Chastity, is to prevent Men from Laying Siege to it: But this Project of the Publicke Stews is the only Way to prevent Men’s laying Seige to it: Therefore this Project is the only Way to preserve Female Chastity. (81)” And later, “Since the Torrent of Lewdness, then, is too strong to be opposed by open Force, let us see if we can find out an Expedient to divert it by Policy, and prevent the Mischief tho’ we can’t prevent the Crime (84.)
There is a lot of scholarly debate about how seriously Mandeville expected his pamphlet to be taken. I think it is possible that, as with much of Swift’s most biting satire, Mandeville is completely serious and just kidding--both at once. Whatever the answer to that question is, it is clear to me that Smith would have been absolutely horrified to be associated with Mandeville on the strength of this pamphlet alone. It may well be why he specifically points to Mandeville’s support of sexual immorality when he lists his errors. “The indulgence of the inclination to sex, in the most lawful union, he considers as the same sensuality with the most hurtful gratification of that passion, and derides that temperance and that chastity which can be purchased at so cheap a rate.” (TMS VII.ii.4.11)  And it is certainly why the section in TMS that discusses Mandeville puts him in the category of “licentious systems.”
No wonder Smith applies some of his strongest rhetoric to his attack on Mandeville. For his system--perilously close to Mandeville’s in some respects--to be taken seriously as a moral system for people who care about being good, he must separate himself as thoroughly as possible from the man who wrote an entire pamphlet dedicated to a cheery and whole-hearted discussion of “the present Subject of Whoring.”

Smith doesn't call Mandeville out by name until late in Theory of Moral Sentiments, but I wonder if there isn't a subtle dig at him right in the beginning:

"How selfish soever man may be supposed..."

Supposed? Supposed by whom? My initial readings made me think that this was just a general comment by Smith. But now, your discussion here makes me think Smith might be targeting Mandeville directly.

Excellent post. Although I have a grudging admiration of Adam Smith's "impartial spectator" fiction (though I would clarify that there are multiple "impartial spectators"), I have always found the Adam Smith of "The Theory of Moral Sentiments" (TMS) to be quite prudish and a bit too moralizing for my taste. Simply put, the conduct the Adam Smith of TMS expects of us is just too high a standard; or to put it terms of modern economics parlance, I would argue that there is an optimal (or at least unavoidable) level of vice that no amount of mere moralizing or philosophical speculation can counter.
Lastly, as a footnote, I find Skwire's conjecture in the fifth paragraph of her essay to be highly plausible, if not probable--Smith's "protective" reaction reminds me of Darwin's similar reaction to Alfred Russel Wallace's work on natural selection, which Janet Browne describes in lurid detail her masterful biography of Darwin.