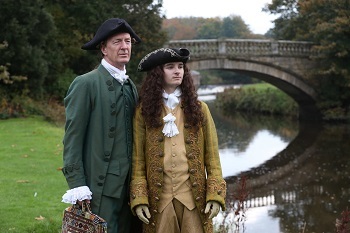 
I just turned 15 and recently moved to a new city. My new school is hard, my teachers are tough, and I’m having trouble making friends. They dress differently. They eat weird food. It’s like they speak a different language. My parents tell me to focus on my schoolwork instead, but I’m just miserable. Will I ever feel like I fit in?


I understand your frustration. In my youth, well, when I was younger than I am today, I served a family as a private tutor. In those days, we took students on what they called “The Grand Tour” which was really just a fancy way of saying we went traveling around in foreign countries.


At the beginning of our trip, we found ourselves living in a new city where we knew almost no one. Even worse, we had no “letters of introduction” which, in those days, meant we couldn’t meet anyone in society. I had a lot of friends in my old city and was used to, as you say today “hanging out” with them all the time.


But in our new town, we had to be formally introduced to people and couldn’t make any friends – for a year! (Even I was so bored, I started to write a book.)


My student was miserable, too, so I completely understand how you feel.  He was your age and frustrated, sad, and lonely. Worse, I did exactly what your parents have been doing. I told him to focus on his studies, which, in retrospect, probably wasn’t the best advice.


Here are two ideas I can give you that eventually worked for us.  First, try to learn about the culture of your new city. Spend some time roaming around, exploring the history, and eating the native foods. If you need to learn some new language skills, give it a try. Once you start to get to know your new place a little bit, you’ll be surprised at the people you meet.


If you have a particular interest or if there’s a particular author or teacher you’d like to meet in your new place, seek them out. They will be flattered and impressed. (Maybe don’t chase them into the Pyrenees like I did a scientist I really wanted to meet, but that’s another story, I think.)

But do be careful of hasty acquaintanceships based on frivolous concerns. Choose your friends and your interests wisely. As I have cautioned youth previously,

The hasty, fond, and foolish intimacies of young people, founded, commonly, upon some slight similarity of character, altogether unconnected with good conduct, upon a taste, perhaps, for the same studies, the same amusements, the same diversions, or upon their agreement in some singular principle or opinion, not commonly adopted; those intimacies which a freak begins, and which a freak puts an end to, how agreeable soever they may appear while they last, can by no means deserve the sacred and venerable name of friendship.

Yours in friendship,
Mr Smith

P.S. You might also find some inspiration in my previous reply to Jr. High is Literally the WORST.