Work, with a Side of Yarn 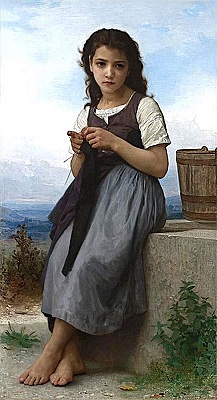 Adam Smith’s discussion of the different wages earned by different professions contains a fascinating digression into the very modern question of side gigs.
Smith gets there by talking about cottagers, whom he defines as “out-servants of landlords and farmers.” In exchange for being on call for large jobs they receive “a house, a small garden for pot herbs, as much grass as will feed a cow, and, perhaps, an acre or two of bad arable land. When their master has occasion for their labour, he gives them, besides, two pecks of oatmeal a week, worth about sixteen pence sterling.” For much of the time, though, these workers wait around for their landlords to need them.
As a result, they have a lot of spare time in which to take on other work. Smith notes that cottagers are often willing to work for much lower wages for these side gigs. In part, this is because the wages from their side gigs are supplementary to what they receive from their landlords. In part, it is because they prefer flexible and temporary side gigs that can be left whenever necessary to allow them to fulfill their obligations to their landlords. Such work will pay less well in order to compensate for these advantages.
Perhaps as a result of the desire for such work to be flexible and temporary, and perhaps because it utilized skills they already used for household production, craftwork was a common side gig for cottagers. And because the cottagers were willing to be paid less for such work, it was possible to bring their piece work to market at a much lower rate. Smith explains:

The produce of such labour comes frequently cheaper to market than would otherwise be suitable to its nature. Stockings in many parts of Scotland are knit much cheaper than they can any-where be wrought upon the loom. They are the work of servants and labourers, who derive the principal part of their subsistence from some other employment. More than a thousand pair of Shetland stockings are annually imported into Leith, of which the price is from five pence to seven pence a pair. At Learwick, the small capital of the Shetland islands, ten pence a day, I have been assured, is a common price of common labour. In the same islands they knit worsted stockings to the value of a guinea a pair and upwards.

The spinning of linen yarn is carried on in Scotland nearly in the same way as the knitting of stockings, by servants who are chiefly hired for other purposes. They earn but a very scanty subsistence, who endeavour to get their whole livelihood by either of those trades. In most parts of Scotland she is a good spinner who can earn twenty pence a week.

As any knitter or spinner can tell you, this is work that can be picked up and put down at will. (I am, in fact, picking up and putting down my own knitting as inspiration for this post ebbs and flows.) Knitting, in particular sock knitting, travels well, and could be bundled into an apron pocket at a moment’s notice if the landlord required one’s services. And experienced and well-coordinated knitters could even work on a stocking while walking to or from the field or kitchen where their “real job” took place.
Similarly familiar to the modern knitter or spinner is Smith’s observation that one would be hard put to earn a “whole livelihood” by either of these trades. People simply aren’t willing to spend enough money for handknits to compensate for a knitter or spinner spending all day, every day at the task. And (as Smith observes elsewhere about pinmaking) one individual crafter just can’t knit enough stockings or spin enough yarn to compensate for the low price.
The rise of side gigs in the modern economy, then, may be more of a renaissance than a complete novelty. And, just as in Smith’s time, the low pay that is often associated with those side gigs may well result from the preference that those workers have for flexible and temporary work that fits into the interstices of their “real” jobs.

I wonder, was it as much of a concern in Smith's day whether practitioners of side jobs/ "gigs" would continue to labor in that capacity for an extended period of time? Cottagers, as opposed to Uber drivers, had the advantage of employer provided housing (and, with land grants, means of producing food as well). Thus it seems that their lives might well have been more stable--featuring fewer fears about making the rent or paying for food-- than those of at least some modern gig workers. This isn't a perfect comparison, obviously, as any Uber driver today has myriad material advantages over their cottager predecessor. Still, it seems to be worth thinking about how the social standing of those doing the gig working might have changed over time, and how their horizons of potential look(ed) then and now.