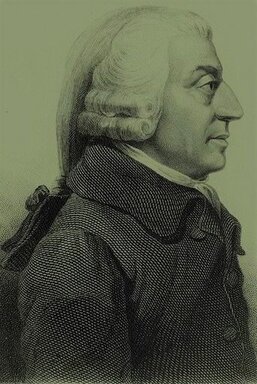 Use Adam Smith's discussion of men "whose public spirit is prompted altogether by humanity and benevolence" as a starting point to discuss civil government and how to approach difficult public policy problems.
“Bellringers” are classroom tools that help set the tone or introduce a topic in the classroom. Adam Smith Works bellringers use quotations from and activities based on the work of Adam Smith, allowing you to illustrate the long history of the ideas you will explore in your classroom by grounding them in great books.

Adam Smith Works Activities are quotations with accompanying activities that you can discuss with your students to introduce a topic, generate deeper discussion, or set the tone for your lesson. They cover topics from economics to history to moral philosophy.

Bellringers are presented as slides ready to pull and use in your classroom. On each slide you can find speaking notes and links to more information.

“The man whose public spirit is prompted altogether by humanity and benevolence, will respect the established powers and privileges even of individuals, and still more those of the great orders and societies, into which the state is divided. Though he should consider some of them as in some measure abusive, he will content himself with moderating what he often cannot annihilate without great violence. When he cannot conquer the rooted prejudices of the people by reason and persuasion, he will not attempt to subdue them by force; but will religiously observe what, by Cicero, is justly called the divine maxim of Plato, never to use violence to his country no more than to his parents. He will accommodate, as well as he can, his public arrangements to the confirmed habits and prejudices of the people; and will remedy, as well as he can, the inconveniencies which may flow from the want of those regulations which the people are averse to submit to. When he cannot establish the right, he will not disdain to ameliorate the wrong; but like Solon, when he cannot establish the best system of laws, he will try to establish the best that the people can bear.” (TMS VI.ii.2.16)

This group activity should take ten minutes, plus any time allocated for class discussion.

Divide the class into pairs for discussion.

Can you state in plain language what Smith is saying a person like this will tend to do when faced with a difficult public policy problem?

How common are “men whose public spirit is prompted by…humanity and benevolence”, as Smith describes them here, in government? How common are they in other management positions?

Do you agree that this is the right approach in government? When might there be exceptions?
Once group discussions are complete, students may asked to share their thoughts with the class or via a short writing assignment.

See the quotation in context as part of the full online text of The Theory of Moral Sentiments here (link will take you to the paragraph in which the quotation can be found).

Adam Smith contrasts men of public spirit with the “man of system”, about which another activity is provided here.