Adam Smith and the U.S. Constitution 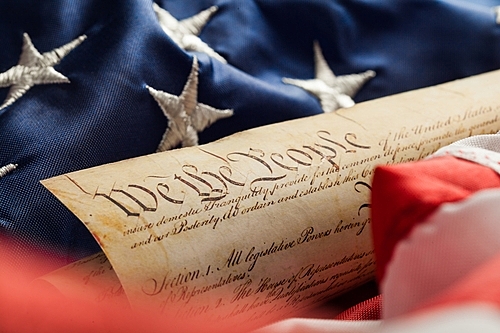 In this lesson, students read and discuss an essay by the Nobel Prize-winning economist Douglass North. They learn how Adam Smith’s ideas influenced the thinking of the Founders who wrote the U.S. Constitution. Next, the students work in groups to do an exercise that involves a more in-depth discussion of the economic features of the Constitution using new examples.

The lesson is written for high school and college students enrolled in an introductory American history or civics course.

If using the written description of the lesson rather than the slide deck, distribute it to students. Explain to students that the purpose of this lesson is to understand how Adam Smith's ideas influenced the Founders who wrote the U.S. Constitution. The U.S. Constitution is primarily a political document. And, correctly, that is how most teachers approach it. However, the Constitution has several key features that helped establish the framework of a market economy. They might be easily missed or overlooked if you did not look for them. In this lesson, the students will gain a deeper understanding of the economic features of the U.S. Constitution and their importance for setting the framework for a market economy that would eventually become the largest economic system in the world.

Distribute a copy of Handout 1 to each student. Ask the students to read the Directions.

Discuss their responses to the Questions for Discussion in Handout 1. Ask:

a. What ideas expressed in Adam Smith’s An Inquiry into the Nature and Causes of the Wealth of Nations appealed to the writers of the U.S. Constitution?

(Like many Americans, Smith was highly critical of Britain’s mercantilist policies, which deeply involved the government in the operation of the economy. The government pretty much ran the economic show by providing subsidies, monopolies, and special trading rights to privileged companies. In contrast, Smith argued that the basis for economic growth was specialization and division of labor. He believed that competition would force people to become more efficient and would encourage improvements and gains in productivity.)

b. What are three features of the Constitution that are fundamental to the operation of a market economy?

(Here are five. Checks and balances on political power in the federal government, the power to tax, protection of private property, creation of a free trade zone among the 13 states, and the enforcement of contracts.)

c. The Constitution eventually established a framework for the efficient conduct of economic affairs. Was that outcome inevitable?

(No. The anti-federalists badly miscalculated. They thought that the Convention would fail to produce a new constitution. Then, they thought the new Constitution would not be ratified. They were wrong on both counts.)

Tell the class that we are now going to examine more deeply the economic features of the U.S. Constitution. Distribute a copy of Handout 2 to each student. Discuss the directions.

Divide the class into five groups. Assign each group one of the five economic features of the U.S. Constitution. They should read the information and then discuss the problem presented for their feature. Ask each group to appoint a spokesperson to contribute to the class discussion when everyone is ready.

Ask each group to report to the class and discuss their responses.

Problem 2: If Jay or the bank could walk away from the loan agreement, these types of loans would rarely be made. Such loans, if they were made at all, would involve very high interest rates reflecting the uncertainty of repayment. Jay wouldn’t get his car. The bank would not earn interest on Jay’s loan. Then, the whole thing snowballs. The car dealership would not sell the car to Jay. The auto industry would be hurt as car buyers no longer can conveniently buy cars. Auto companies would lose profits and begin to lay off workers. The whole system collapses. Why? Because people can’t trust each other to hold to the contracts they sign.

Feature 3: Checks and Balances
(What did it do? The system of checks and balances reduces the power of political parties – factions – to pass legislation that do not have sufficient popular support. It slows the legislative process and makes redistribution of income more difficult.)

Problem 3: While the desire to take extraordinary actions in the time of an emergency is understandable, the Constitution is constructed to prevent a massive power grab by any branch of government.
The first thing that would happen is that the legislation would be challenged in the courts. The Supreme County would almost certainly rule the legislation unconstitutional. It violates several provisions in the Constitution that lay out the system of checks and balances.
But, let’s imagine that the Supreme Court had no such power. What could go wrong then? The President, in these circumstances, might make some good spending and taxing decisions for the overall welfare of the nation. But, when presented with such overwhelming power, large-scale corruption is inevitable.
Elected officials, like business people, respond to incentives. The incentives in government are different from those in the private sector. There will be a large amount of spending in an unaccountable environment – almost certainly more than is necessary.
Where will excess spending go? Some spending will be simply wasted because of a lack of oversight.
Who might benefit? Some spending may be directed to help interest groups friendly the President’s reelection and or to promote policies favored by the President. Taxes paid by the President’s friends might be reduced.
Who might be hurt? Taxes paid by the President’s opponents might increase. There will be a temptation to keep the emergency power in place long after the emergency has passed harming the President’s opponents even further.

Problem 4: Agricultural production plummeted in Cuba after the 1959 Cuban Revolution because the government violated the private ownership rights of business owners – both Cuban and foreign.
Private owners of farms and ranches in Cuba have an incentive to manage their businesses efficiently enough to earn a profit. They weigh costs and benefits of different decisions and are directly affected by the outcomes of their decisions. Ranchers made sure their cattle had the right grass to eat because their livelihood depended on it.
The livelihood of government officials in Havana did not depend on managing enterprises efficiently. They would remain in power no matter how well the farms and ranches performed. By mismanaging the agricultural sector, they nearly caused a famine in Cuba.

Feature 5: The Taxation Clause
(What did it do? The taxation clause gives the federal government the power to tax. The Congress under the Articles of Confederation did not have the power to tax.)

Problem 5: The U.S. federal government has been running historically high deficits for decades. Running a deficit means that current tax revenues are not sufficient to pay for current government operations. To make up for the shortfall, the federal government sells bonds to financial institutions, individuals, and institutions in other nations.
Why do bond buyers have confidence the United States will pay its debts even while it is running deficits? The whole system is backstopped by the American taxpayer. Buyers of bonds believe the federal government will raise taxes, if necessary, to make sure it meets its financial obligations.
What if the federal government instead defaulted on its bond obligations? It would lose the trust of investors who buy bonds. Investors would, in turn, demand higher interest rates on new bonds due to the increased risk of another default. Higher interest rates would require more government spending to pay back bonds, which would put even more pressure on deficits. Defaulting on bond payments often begins a spiral toward financial collapse. That is why the power to tax is so important.

What ideas expressed by Adam Smith appealed to the writers of the U.S. Constitution?

(Many Americans believed they were suffering economically from Britain’s mercantilist policies. Smith’s Wealth of Nations criticized mercantilism. Smith argued that the basis for economic growth was specialization and division of labor. He believed that competition in the market would force people to become more efficient and would encourage improvements and gains in productivity.)

What do you think are one or two of the real “game-changing” economic features included in the U.S. Constitution – features that set the stage for future economic success?

(Accept an explanation that supports any of the five features discussed in the lesson including the Commerce Clause, Contract Clause, the system of checks and balances, Takings Clause, and the Taxation Clause. It is a challenge to isolate only one or two features as being the most important. The Taxation Clause almost certainly saved the nation from financial collapse by opening the door to getting much-needed credit. The system of checks and balances over the long term has helped encourage the government to pass only laws and big projects with widespread popular support. The Commerce Clause prevented trade wars between the states. The Takings Clause helped to preserve private property rights. The Contract Clause ensured that people could have confidence in doing business with each other.)

Teachers can ask students to watch high production value videos focused on the ideas of Adam Smith. Each video is accompanied by a set of questions for further thought and discussion.


The Free Market video reinforces Smith’s views on mercantilism and free trade.
The Role of Authority video features Smith’s view on the role of government.