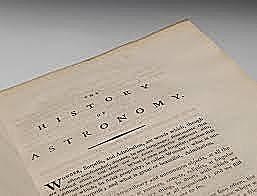 And even we, while we have been endeavouring to represent all philosophical systems as mere inventions of the imagination, to connect together the otherwise disjointed and discordant phaenomena of nature, have insensibly been drawn in, to make use of language expressing the connecting principles of this one, as if they were the real chains which Nature makes use of to bind together her several operations. Can we wonder then, that it should have gained the general and complete approbation of mankind, and that it should now be considered, not as an attempt to connect in the imagination the phaenomena of the Heavens, but as the greatest discovery that ever was made by man, the discovery of an immense chain of the most important and sublime truths, all closely connected together, by one capital fact, of the reality of which we have daily experience. (105)

Smith’s skepticism falters in the face of the Newtonian achievement, but perhaps he should have stuck to his skeptical stance. After all, the twentieth century would show that Newton’s physics was not the final word, and that even Newton’s notion of universal gravitation could be improved upon and perhaps put in a form that would have been more acceptable to Leibniz and the Cartesians. Although Einstein’s General Relativity is even more abstrusely mathematical than Newton’s physics, it does provide a mental picture for the operation of gravity, in the form of distorted spacetime, that Newton never supplied.
Smith’s endorsement of Newtonian physics is one of the few places in Astronomy where he makes a positive claim about reality rather than providing a historical account of the actions and choices of others. However, there are a few other places in his essay where Smith’s skepticism fails him and he makes positive claims that don’t hold up well today. He makes the interesting claim that spots like those seen on the Moon were discovered on each planet, and that observations of these spots demonstrated that each planet rotated on its own axis. It is true that the planets do rotate, and the aforementioned Cassini had used observations of spots on Jupiter and Mars to estimate their rotational periods. However, in spite of some earlier claims, efforts to observe the rotation of the other planets (including Uranus and Neptune, both of which were discovered after Smith wrote Astronomy) were not successful until the twentieth century. That argument by analogy, though, was persuasive. If Earth, Mars, and Jupiter rotate then so must the other planets.
In a similar vein, Smith accepts the idea that the density of the planets decreases with distance from the Sun. This idea goes back at least to Kepler and it was given support in Newton’s Principia, where Newton was able to estimate the relative densities of Earth, Jupiter, and Saturn to show that Earth was the most dense and Saturn the least. However, Newton’s method could only be used for planets that had orbiting Moons and thus it could not be applied to Mercury or Venus (which have no moons), nor to Mars (whose moons were not discovered until 1877). We now know that the densities of the planets do not follow any such pattern. Smith may have been motivated to accept this idea because it seemed to fit with the notion, widely accepted in the mid-eighteenth century, that all planets in the solar system were habitable and likely inhabited, although probably by beings of somewhat different composition. Smith’s contemporary Immanuel Kant made the decrease of planetary density with distance from the Sun a key part of his argument for the habitability of the planets in his 1755 Allgemeine Naturgeschichte und Theorie des Himmels.
What, then, are we to make of Smith’s Astronomy? We should view it with the same sympathy that he gives to astronomical theories of the distant past. The important historical and philosophical insights in Smith’s essay should not be overshadowed by his occasional errors or omissions. His account of the development of astronomy is largely correct, and it serves well to illustrate his philosophy of science. Most impressively, Smith’s emphasis on the subjective aspects of theory choice mirrors the positions of some of today’s most prominent philosophers of science. As a scholarly work on the history of astronomy, Smith’s essay would soon be completely supplanted by, for example, the work of Delambre. Even so, philosophers as late as the early twentieth century would have done well to heed Smith’s insights into the nature of scientific inquiry.