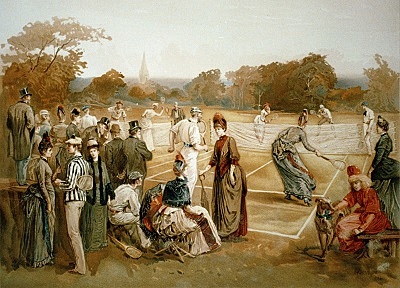 Prang (L.) &amp; Co. [Public domain]
January 23, 2019
In Part 1 we discussed propriety as the “OK” region between praiseworthiness and blameworthiness. The notion of propriety is used on both of two sides of a virtue: the deficiency side and the excess side. Smith embraces Aristotle’s picture of Deficiency-Virtue-Excess.  Thus we have Vice-Virtue-Vice.
Propriety in a single aspect and overall 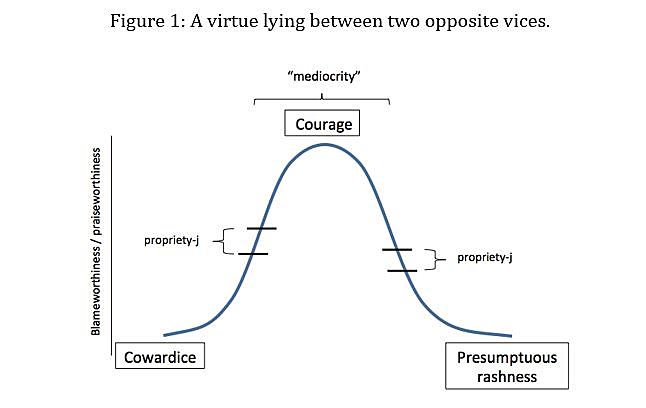 Figure 1 offers a two-sided depiction of the virtuousness of an action. But an action or piece of conduct may have several important aspects—aspects aside from courage—and the deficiency-excess framing may be applied to each aspect. Now let’s move from two-sided moderation to N-sided moderation, balancing various salient or pertinent aspects.


It seems to me that, in judging conduct, the propriety-as-just-OK idea needs to be deployed in two different ways. First, in judging the action in regard to a single aspect (or a single set of aspects), and second, in judging the action overall (or, over all pertinent aspects). Here, Smith is not explicit about the distinction, nor about whether he is employing both ways of judging conduct. But both ways are found in TMS, and I think it fair to say that he employs both.

To illustrate, let me offer an analogy of Bill Mazeroski, a baseball player who in fielding (defense) far surpassed standard levels, but in hitting (offense) was perhaps only a little above the standard (he batted .260 lifetime). So, in fielding, Mazeroski was super-duper. But as a baseball player overall he was perhaps only great. (He was inducted into the Hall of Fame in 2001, 29 years after his retirement.) Here we see the contrast between evaluation in regards to a single aspect and evaluation overall.

But the single aspect vs. overall contrast is itself something that can be zoomed in and zoomed out: We might zoom in and confine the conversation to fielding alone, and speak of overall fielding ability, then break that down into aspects of fielding (catching, range, throwing, etc.). Or we might zoom out to a larger game of human life, and say that Mazeroski was great in the single aspect of playing baseball, then inquire after his quality as a human being overall.

When it comes to the virtues treated by Smith, we can see the same distinction between single-aspect and overall virtue. What Smith writes for the virtues could also be applied to baseball skills: “[W]ho is so perfect as not to have many superiors in many different qualifications?” (248.25).

In The Theory of Moral Sentiments (TMS) we find the following passage, in which Smith explicitly associates propriety with suitableness “to all the circumstances”—that is, overall suitableness—as opposed to any single aspect:

The propriety of a person’s behaviour, depends not upon its suitableness to any one circumstance of his situation, but to all the circumstances, which, when we bring his case home to ourselves, we feel, should naturally call upon his attention. If he appears to be so much occupied by any one of them, as entirely to neglect the rest, we disapprove of his conduct, as something which we cannot entirely go along with, because not properly adjusted to all the circumstances of his situation: yet, perhaps, the emotion he expresses for the object which principally interests him, does not exceed what we should entirely sympathize with, and approve of, in one whose attention was not required by any other thing. A parent in private life might, upon the loss of an only son, express without blame a degree of grief and tenderness, which would be unpardonable in a general at the head of an army, when glory, and the public safety, demanded so great a part of his attention. (202.5)


Smith speaks of “all the circumstances” and I speak of “overall,” but overall judgments do not really consider all conceivable aspects, because aspects are innumerable. When we come to overall judgments, what we do, of course, is consider the aspects that strike us as the most important, that “call upon” our attention. We give less thought to other, seemingly less important aspects.

Propriety Ladders
As discussed in Part 1, propriety depends on a particular community or reference group. I think it is appropriate on our part to read into Smith an idea of a sequence of communities ordered by rising standards.

The idea of a propriety ladder does not find clear expression in Smith’s writings, but it is there, if only implicitly. It is implied by two features of Smith’s thought. First, the stepping from one level to a higher level, from community j to community j+1. Once we recognize stepping from j to j+1, we simply iterate the idea and step from j+1 to j+2, and so on. The second key feature of Smith’s thought is that he formulates moral concepts in a way that discourages thinking in terms of a lower-most or an upper-most. Such open-endedness ensures that the iteration just spoken of is possible, and, thus, we have a ladder that, at either end, has not a terminal rung but an ellipsis.

Smith distinguishes one level of propriety from another when he explains that the admiration we feel for great actions arises from our perception of “the great, the noble, and exalted propriety of such actions” (192.11). To speak of a propriety that is great, noble, and exalted is to perceive a propriety above ordinary propriety. Elsewhere, Smith contrasts a self-restraint that arises from a “vulgar prudence” and a self-restraint that arises from “the sense of propriety,” and says the former constitutes “a propriety and virtue of a much inferior order” to the latter (263.5).

Likewise, Smith speaks of a “superior prudence,” which is a prudence “combined with many greater and more splendid virtues, with valour, with extensive and strong benevolence, with a sacred regard to the rules of justice, and all these supported by a proper degree of self-command” (216.15). “This superior prudence,” Smith says, “when carried to the highest degree of perfection, necessarily supposes the art, the talent, and the habit or disposition of acting with the most perfect propriety in every possible circumstance and situation” (ib.).[1] Thus, Smith ascends the ladder to where we find “the most perfect propriety.”

“None but those of the happiest mould are capable of suiting, with exact justness, their sentiments and behaviour to the smallest difference of situation, and of acting upon all occasions with the most delicate and accurate propriety” (162.1).


The exaltedness of the most accurate propriety may be visualized as a fine range of “mediocrity” in Figure 1: Imagine two propriety lines narrowly straddling the peak of the curve. In difficult situations, this is the idea of complete perfection, which “no human conduct ever did, or ever can come up to” (26.9).

Sports prowess again provides an analogy. We see rising standards in the various levels or leagues of a sport. But sports also serve as a foil, for there is something that we see quite clearly in sports that we do not see nearly as clearly in the moral arena. In sports, there is close agreement about quality. In tennis, the match itself is governed by rules that are precise and accurate. The two contenders simply play each other and we see who wins. If plain spectatorship is insufficient, statistics and other metrics lead the experts to agree remarkably closely about who is best. Tennis experts might disagree a bit about who is better, but they can agree remarkably well on the ladder itself

When it comes to the moral arena, however, the looseness and complexity of the rules mean that we should recognize disagreement and confusion not only over how best to formulate the rungs of a ladder (that is, whether we are talking community j or community j+1) but over whole ladders, whole sequences of proprieties. In considering hospitality, any two people will often find that they have differently formulated ladders—that is, they have different notions of what constitutes hospitality and what improvements in it look like.

Even if one person were to come to see how the other person formulates the hospitality “ladder,” she often disagrees with its propriety. Yes, to judge the different formulations we return yet again, now at an even deeper level, to…a sense of propriety! Smith teaches us that such problems inhere in all of the becoming virtues, for example, courage, friendship, generosity, temperance—even gratitude and prudence.

Tennis has pretty clear, determinate standards of excellence, and highly visible top performers. Morality has neither.

Concluding Remark
If your head is spinning, I hope it’s in a good way. When we don’t know where we are, sometimes we feel lost. But other times we enjoy the adventure.

Smith well knew that propriety involves unending spirals and indeterminacies. People are bound to disagree on propriety. Could it be that that is the chief lesson of TMS? Could that be why Smith emphasizes commutative justice and its specialness? Even amidst the wildest blooming confusion, commutative justice offers a social grammar both for the enjoyment of personal tranquility and for flourishing adventures in propriety.