Adam Smith and the Highlanders 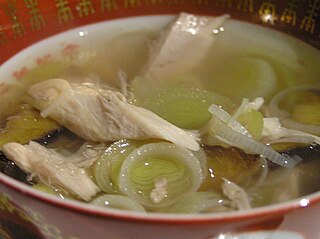 
1.  Wash your leeks well. (They can be sandy.)  Slice the white and light green parts into ½ thick slices. Set aside.  Rewash the dark green tops if needed, then thickly slice.
2. Add the chicken, dark green leek tops, and onions to the soup pot or slow cooker. Add the celery and the bouquet garni. Fill the soup pot or slow cooker with enough water to cover the chicken and vegetables.
4.  Cover and simmer on the stove top for 1 hour or in a slow cooker, on low for 2-3 hours.  When the chicken is cooked and easily separates from the bone, turn off the heat and let cool.
5. In the meantime, in a small bowl, pour 1 cup of boiling water over the prunes.  Set aside.
6. Using tongs, remove the chicken to a separate plate. Then strain the broth into a large bowl pressing on the vegetables to remove the liquid. Return the liquid to the soup pot or slow cooker.
7. Add the white and light green leek slices and barley to the soup. Season with salt and pepper. Cover and return to a simmer on the stove top for 30 minutes (or slow cooker for 1 hour on low) or until the barley is cooked. In the meantime, remove the cooked chicken from the bones, chop if needed, and set aside.
8. To finish your soup, taste and re-season the broth, then add the chicken. Add ½ cup of the prune water and re-season if needed to taste. Chop the prunes for serving on top of each portion of soup.