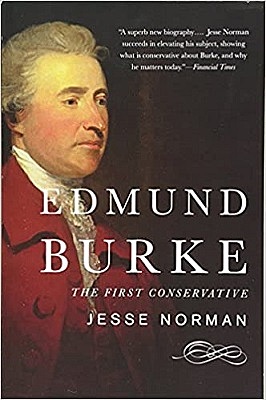 Part 1 of a NEW #ReadWithMe

Jesse Norman, MP, the author of Edmund Burke: The First Conservative, does not play around with the first sentence in his introduction. “Edmund Burke is both the greatest and most underrated political thinker of the past 300 years.”
Everything about that sentence makes me want to issue a firm “settle down!” to Mr. Norman, tell him he has about 300 pages to build up to that, and remind him that people like Adam Smith, James Madison, David Hume, Georg Hegel, Karl Marx, Friederich Hayek, and John Rawls all seem to get a lot of mention, too. The honorable member of the UK Parliament from Hereford is, after all, a politician, and therefore subject to exaggeration. He is also trying to justify the subject of his book. I think he makes an excellent case for Burke being an important fulcrum point in modern trans-Atlantic politics, but I don’t think he quite reaches the high bar he sets for himself.
The first half of the book is focused on Burke’s upbringing, education and chronological career in writing and politics. Norman takes great care to show Burke as an individual who struggled throughout his early life and as someone who chose a unique path. Burke’s family was Anglo-Norman Irish who had long-ago converted to Protestantism. Despite this, accusations of  Irish “otherness” and popery would dog Burke for his entire career. Political cartoons of the day would depict him with a biretta priest hat late in his life, after years of serving the Crown. He also attended a non-conforming Quaker school in Ireland, further marking himself as outside the mainstream of English and Anglican. Burke then moved on to Trinity College in Dublin, where he gained a taste for writing.
By age twenty, he was in London and enrolled in the Middle Temple preparing for a career in law. During this time, Burke found his wife, Jane Nugent, a Catholic, but little else to occupy his mind. Five years later he had abandoned the law and embarked on a more satisfying but less lucrative writing career. This enraged his father, who had bankrolled him to this point.
He managed to work quickly, publishing three well-received items in a short period of time, including an assessment of the North American colonies and a philosophical tract on beauty and sublimity. More importantly, it was during this period that he began editing the Annual Register. This wide-ranging intellectual publication became the hub of Burke’s London connections, and through it he would eventually encounter Hume, Adam Smith, Samuel Johnson, and the other members of The Club.
Norman provides some detail on the relationship between Burke and Johnson. Johnson, not easily impressed, said of Burke that he “is an extraordinary man” and “that fellow calls forth all my powers. Were I to see Burke now, it would kill me.” That is surely high praise from Johnson, but they remained at friendly odds with Johnson a strong Tory and Burke a professional Whig by this time.
Now Norman begins the deep dive into Burke’s political career, which lasted the rest of his life. It is also here that I find the structure of the book beginning to strain. Norman wants to keep biography in Part 1 and Burke’s thought in Part 2, but struggles to keep the two separate throughout the book. A strict chronology or a strict review of Burke’s influence on political thought would have been a better approach. I suspect Norman’s goal was to not lose either the philosopher or the historian in his writing, but by trying to serve both he fails to serve either.
Regardless of approach, the remainder of the first section can be seen as Burke’s addressing of five successive issues: the 1766 fall of the Rockingham administration, the American Revolution, the Gordon Riots, the Hastings Trial, and the French Revolution. Throughout these events, Norman attempts to show Burke as staking out a reasonable and, most importantly, a principled middle ground between the radical Whigs of his own proto-Party and the Tories.
Specifically, Burke sticks with his mentor Rockingham, refusing to follow Wilkes and eventually Fox into more radical corners of Whiggishness. Yet he sides with Wilkes in being pro-rebellion (if not pro-independence) for America. Burke personally faced down the mob of anti-Catholic rioters during the Gordon Riots, a brave move given his status as a crypto-Catholic in the popular imagination and his record of supporting Irish economic reform and emancipation. In the Hastings Trial, Burke again linked arms with radical Whigs in attempting to end the use of India as a British aristocratic and upper-class piggy bank at the expense of native Indians. Finally, he turned against radical Whigs, finding the French Revolution not a clarion call for freedom, but an invitation to pandemonium.
Norman sees all of this taken together as creating a philosophical position by Burke, which results in the eventual rise of a cohesive conservatism both in America and the United Kingdom. In the next section, he leaves biography behind and attempts to trace out the strands of Burke’s thought and show how they create this philosophical position.
Questions coming out of Part One: Life

Related Links:
Maria Pia Paganelli, Who Was Adam Smith? at Econlib
Carl Oberg, The 18th Century and Social Networking
Kenly Stewart, The Professor and the Statesman: The Friendship of Adam Smith and Edmind Burke
Burke and the French Revolution, at the OLL