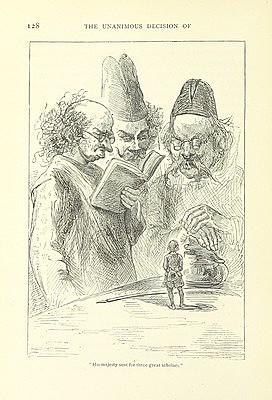 What does Swift reveal about his own beliefs through Gulliver’s experiences with Kings and royals?
Parts 2 and 3 of this great fantasy novel include rich tales of the inner workings of several kingdoms and Kings. Part 2 takes place in Brobdingnag, where Gulliver encounters the exact opposite circumstance of proportionality to the inhabitants as he did in Lilliput. Here, he is again his normal self, but in a land of giants. His vulnerability to bodily harm contrasts markedly with his prominence as the Mountain Man in Lilliput. (See Part 1 of this essay). It never seems to take long after washing ashore for Gulliver, the star visitor, to be brought before the monarchy of each new land.
The particularly interested and scholarly King of Brobdingnag engages Gulliver in lengthy conversations about 100 years of English history and accounts of the traveler’s own experiences in his beloved homeland. In a marvelous, lengthy encounter with the King, Swift deftly applies the use of irony as Gulliver earnestly presents the merits of England’s governance, legal system and military, all systems that Swift despised. The King dismisses with disgust “...the bulk of your natives to be the most pernicious race of little odious vermin that nature ever suffered to crawl upon the surface of the earth.”  We learn on the first page of the book, that naive and patient Gulliver was once a student at Cambridge, an apprentice to a surgeon, a student of navigation, a reader of the best books, ancient and modern, was gifted at language acquisition and possessed ‘strength of memory’. He is unphased and unconvinced by the King’s critique of English institutions and is too blinded by loyalty or is simply incapable of recognizing the King’s virtuous moral philosophy and skepticism.
In five sessions of several hours, Gulliver recounts the workings of the three mighty kingdoms of England (and the plantations in America), including the selection process of members of Parliament, the House of Peers, bishops and the House of Commons,

who were all principal gentleman, freely picked and culled out by the people themselves, for their great abilities and love of their country, to represent the wisdom of the whole nation.

He admired judges as,

those venerable sages and interpreters of law, presided, for determining the disputed rights and properties of men, as well as for the punishment of vice and protection of innocence.

In the sixth meeting, the studious King addresses his hand-written notes to challenge Gulliver with a barrage of astute questions on many of the topics of English governance. Notable to the selection and efficacy of judges, the King asks,

What time was usually spent in determining between right and wrong, and what degree of expense? Whether advocates and orators had liberty to plead in causes manifestly known to be unjust, vexatious, or oppressive? Whether party, in religion or politics, were observed to be of any weight in the scale of justice? Whether those pleading orators were persons educated in the general knowledge of equity, or only in provincial, national, and other local customs? Whether they or their judges had any part in penning those laws, which assumed the liberty of interpreting, and glossing upon at their pleasure? Whether they had ever, at different times, pleaded for and against the same cause, and cited precedents to prove contrary opinions? Whether they were a rich or a poor corporation? Whether they received any pecuniary reward for pleading, or delivering their opinions? And particularly, whether they were ever admitted as members in the lower senate?

This King was certainly well versed in jurisprudence. We’re told only that Gulliver answered the questions as best as he could, purposely placing his country’s “virtues and beauty in the most advantageous light.” The astonished King summed the past 100 years of English history with this protest:

Then, in an act of apparent kind condescension, the King took “his little friend Grildrig” (which is his name for Gulliver) in his hand and stroked him, offering encouraging words by suggesting that he likely escaped the many vices of his country due to his extensive travelling. His majesty’s assessment of England’s “bulk of the natives” was damning, including these specific condemnations:

It does not appear, from all that you have said, how any one perfection is required toward the procurement of any one station among you; much less, that men are ennobled on account of their virtue; that priests are advanced for their piety or learning; soldiers, for their conduct or valour; judges, for their integrity; senators, for their love of their country; or counsellors for their wisdom.

Gulliver reflected generously toward this excellent King and the entire encounter. He excused the King’s ignorance because he lives secluded from the world and from the norms of manners and customs that prevail in other nations. He excused his narrowness of thinking, “his want of knowledge and how politer countries would consider this King’s notions of virtue and vice as an unlikely standard.” Gulliver described this simpleton King’s contrary assumptions about governance and law:

He confined the knowledge of governing within very narrow bounds, to common sense and reason, to justice and lenity, to the speedy determination of civil and criminal causes” and he believed “that whoever could make two ears of corn or two blades of grass, to grow upon a spot of ground where only one grew before, would deserve better of mankind, and do more essential service to his country, than the whole race of politicians put together.

Adam Smith must have marked that last line. It’s the kind of vivid imagery he reveled in, on a dear topic that is intertwined in his lifetime work: the ingenuity of the human spirit, unleashed to pursue one’s self interest, inadvertently leading to the economic growth of a country unfettered by tinkering politicians. Seventy years later, Adam Smith wrote,

And about politicians, in his famous story of the “Man of System”, Smith wrote,

The man of system… is apt to be very wise in his own conceit; and is often so enamoured with the supposed beauty of his own ideal plan of government, that he cannot suffer the smallest deviation from any part of it. (TMS, Part VI,Section II,Ch.II)

Swift was quite cautious about overtly critiquing current affairs and certainly the reigning monarchy. His fantasy story did not directly identify particular politicians, and usually refers to the kings or queens of Europe generally (until Part IV where therPrince of Orange and the current queen are mentioned). Instead, his fictitious characters had universal appeal while their circumstances mirrored real ones.
How very different was the phase of the Enlightenment era and Adam Smith’s approach of open critique of the British government and monarchy, in his Inquiry into the Nature and Causes of the Wealth of Nations, published almost 75 years later. Erik Matson writes “The Wealth of Nations (WN) represents his effort to reform British policy and gradually establish a system of natural liberty—a system of limited government and the rule of law in which a commercial society flourishes.”
Swift claimed to not be fond of Scotsman. But had he been alive in 1776, he would likely have embraced this hero of liberty.

Next up: Musings on the culmination of Gulliver’s adventures, a few commonalities between Swift and Smith, and a look at the endurance of the literary masterpiece

Thanks for your post, Alice! I appreciated the strong mix of quotations from Swift and Smith, and I'm looking forward to seeing how the comparison develops in the next part. I wonder in advance though, do we have any sense of Smith's attitude toward adventure directly? Best as I can tell, an explorer like Gulliver doesn't fit neatly into the category of capital-wielding individual or "man of system," but I am curious about the extent to which Smith thought about adventurers and travelers as a social type, and about the social utility of their wanderings.