On the Development of Communities 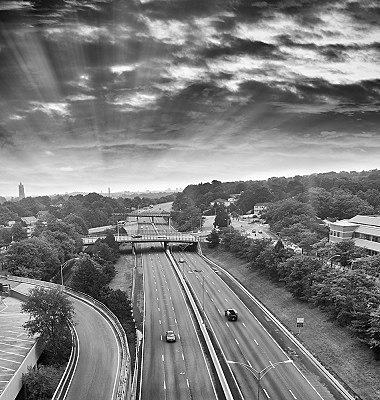 July 24, 2020
A favorite pastime when traveling is asking the question “Why is there a settlement here? Why did a community develop in this location?”
The base answer is almost always the same--access to transportation. St. Louis sits near the confluence of two major rivers. New York and Philadelphia are both on major rivers. Boston is a natural harbor. New Orleans is near where the Mississippi River empties into the Gulf of Mexico. Chicago developed almost overnight as a city served both by Lake Michigan and a navigable river.
But what about smaller communities? Or landlocked ones?
The answer remains the same--access to transportation.
More specifically, the establishment and development of a community is the result of  specialization and the division of labor. Transportation facilitates trade, which allows the products of communities to be sold elsewhere, and makes it possible for imports from other places to be available. Access then brings in others---the “butcher, brewer and baker”--and eventually, the doctor, teacher, entertainer, and many other occupations and industries that make communities engaging and vibrant.
In Book 1, Chapter 3 of The Wealth of Nations, Smith notes, “there are some sorts of industry, even of the lowest kind, which can be carried on nowhere but in a great town.” The division of labor is limited by the extent of the market, because it is difficult to specialize when the market is small, both because of the lack of access to resources, but also because potential customers are few.
Smith notes earlier in The Wealth of Nations, “Without the disposition to truck, barter and exchange, every man must procure to himself every necessary and conveniency of life which he wanted.” A community provides the conveniences of life and becomes an organism unto itself - the epitome of spontaneous order.
Smith notes that In scattered areas, “every farmer must be the butcher, baker and brewer for his own family. In such situations, we can scarce expect to find even a smith, a carpenter or a mason within less than 20 miles of another of the same trade. The scattered families that live at 8-10 miles distant from the nearest of them must learn to perform themselves a great number of little pieces of work, for which, in the more populous counties, they would call in the assistance of these workmen.”

A waterway connects scattered communities, allowing them to eventually join up and become larger settlements. In Colonial America, Smith noted, “the plantations have constantly followed either the seacost of the banks of the navigable rivers, and be scarce anywhere extended themselves to any considerable distance from both.”
As a result, Smith noted, “The first improvements of art and industry should be made where this conveniency opens the whole world for a market to the produce of every sort of labor,” and they later extend to the “inland parts of the country.”
In the 1800s, inland and landlocked communities sprung up around stops on the railroad, and cities such as Indianapolis and Atlanta grew up quickly at railroad junctions.
In the United States, nearly every town, city and settlement was settled prior to the invention of the automobile. Yet, like organisms, they adapted to new realities. Old river cities like St. Louis and Chicago became major railroad junctions when trains replaced boats as the main forms of transport, and later the cities adapted themselves to automobile use. Suburban areas grew from the larger cities and linked up previously-disconnected segments. Rural communities also grew radially, and often grew with the arrival of a major employer, such as an auto factory.
None of this happened because of any single desire to build a community. In 1883, more than a century after Smith’s words in Wealth of Nations, Carl Menger noted in Investigations into the Method of the Social Sciences:

[A]s a rule, new localities arise ‘unintentionally.’ … The first farmers who take possession of a territory, the first craftsman who settles in their midst, have as a rule their individual interest in view. Likewise, the first innkeeper, the first shopkeeper, the first teacher, etc. With the increasing needs of the members of the society still other economic subjects find it advantageous to enter new professions in the gradually growing community or to practice the old ones in a more comprehensive way. Thus, there gradually comes into being an economic organization which is to a high degree of benefit to the interest of the members of the community.

Today one can see the evidence of a growing, adapting community in any small town connected to an interstate. There’s often a central business district around the former railroad station or the junction of two major streets, with older homes and businesses tightly packed together, followed by businesses and older post-World War II subdivisions that stretch out like branches along the main highway. Then you’ll find a second business district of supermarkets, hotels and restaurants that clusters near the interstate exit - and often stretches along the road to the exit - with newer subdivisions radiating from there.
Some amateur above-ground archaeology shows the history of development of a modern community. It likely was settled more than a century ago, but it continues to evolve and develop as the needs and mobilities of its members change. Yet, the bedrock of every community is trade and exchange, enabled by transportation.. Each member of the community is there for different reasons, but they form a community that ultimately, is built around accessibility to goods and services. They’re formed based on each individual and family meeting their own needs--whether economic or cultural--and grow spontaneously, as if they were their own organism.
And on that basis, as our needs evolve, our communities will adapt and grow to meet them.

Thank you to the author for this interesting reflection on the location and development of communities! Thinking about my own landlocked town--the downtown of which is eerily similar to the basic pattern you describe in the second to last full paragraph--and how its location was made possible only by the technology of the railroad and later the automobile (as well as its strategic location on an interstate), I wonder, might future innovations in transportation continue to render geography less and less (absolutely) important in the placement and success of communities? A successful "skyway" of flying cars, for instance, could make interstate real estate less important. But then, on the flip side, a new system of Hyperloops or mag-lev trains or whatever is going to create new desirable locations back here on the ground (around stations, stops etc., just like the rail road). No final answers here, but both Smiths speaking above deserve credit for sparking an interesting series of reflections on what gets communities going!

Thank you. Having lived most of my life in the shadow of the National Road, I've always been fascinated by its role in the development of Middle America, and by extension, the living community. It's been fascinating to see how communities adapt to newer forms of transportation and living, re-use areas built for a previous form of living. While the main shopping area might have moved from an old downtown to a strip stretching to the interstate, the old downtown has been revitalized as a home of independent shops, coffee shops, art galleries, apartments and the ubiquitous antique stores. We benefit from the ease of trade and exchange that community provided a century ago, and continue to benefit today as our communities evolve. Like you, I'm fascinated to see how future transportation modes affect living, trade and exchange, and as a result, how we adapt.

Andrew--That's all also a list of good reasons to be cautious about public transportation projects that can't change and flex as the cities they serve change and flex. Just because right now neighborhood X is the place where the bars and restaurants are doesn't mean that it always will be. And transport programs that don't allow for that kind of change are probably doomed to be disasters.