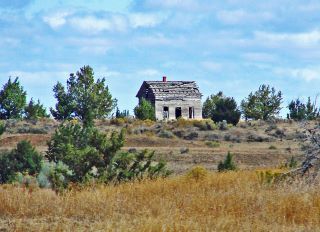 In Part II of her review of Caroline Fraser's Prairie Fires, Alice Temnick explores the life and personality of Rose Wilder Lane, daughter of the author of the Little House on the Prairie books.
Caroline Fraser’s in-depth account of the pioneer life of author Laura Ingalls Wilder as shaped by the historic events of the westward expansion leaves the reader with much to contemplate. Part I of this book review was a reflection on Wilder’s choices of memories included in her book series, her embellishments of farm life that propelled the myths of Great Plains literature, and on the omission of indigenous persons displacement. These revelations were unsettling to this fan of historic fiction who, as a young reader, mistakenly believed this to be the genre of the Little House on the Prairie books.
The Smithian virtue of prudence (also explored in Part I) was demonstrated consistently to Laura Ingalls Wilder by Ma (Caroline Ingalls). Laura exhibited reverence for the virtue of prudence in her thematic optimism in presenting modern farming techniques and home management tips in articles for a rural Missouri news bulletin. The deep struggle that characterized her childhood frontier life was repeated in her early adult life. Husband Almanzo’s poor financial decisions (much like her Pa’s) had the new family mired in debt, house instability and poverty. Drought, cyclones, sickness, and the particularly severe economic depression of 1893 exacerbated difficult conditions. Yet Rose later recalled that the Ingalls family, including her mother were, “sublimely content with their lot...the truth is they didn’t expect much in this world and they just shed thankfulness around them for what they had”. Laura Ingalls Wilder modeled Smith’s description as one who could “abstain from present pleasure or to endure present pain, in order to obtain a greater pleasure or to avoid a greater pain in some future time.” Frugality was her means toward the dream of stability that her late life writing career would finally bring to fruition.
In the second half of the Prairie Fires, Fraser focuses on Wilder’s eccentric daughter, Rose Wilder Lane (1886 - 1968), exploring the complicated relationship between mother and daughter and the later shift in the power dynamics between the two that shaped their oddly competitive writing careers.
Rose Wilder Lane was the polar opposite of a prudent person. After reading Fraser’s account of Lane, descriptors such as chaotic, impulsive, resistant to authority, and self-destructive come to mind. Rose inherited none of the character or discipline from her maternal bloodline and seemed to be unable or unwilling to implement prudent decisions in her own erratic life. She was a precocious only child whose early life was a struggle, much like her mother’s. Later in life, Rose vividly recalled living in a one room shack without furniture, a trying wagon journey across Kansas, and other events marked by hunger and an uncertain future. After dropping out of high school (she was likely dismissed by administration) and moving in with her aunt in Louisiana, she did graduate, but could not afford college. She endured a short-lived marriage to an itinerant, dishonest salesman who hobnobbed with wealthy people while unable to pay rent. Rose embarked on her sporadic writing and editorial career that began in San Francisco and took her to many places throughout the east coast and Europe, including to Albania, a country she adored. She was a notorious practitioner of yellow journalism, a tabloid newspaper approach to telling half-truths, adding fabricated dialogue to real accounts and even telling outright lies in many cases. Her biography of Charlie Chaplin, whom she met once, was panned by scholars and called a “flagrant autobiographical fake”. Chaplin filed suit and the books were destroyed, though some still circulated. She followed this debacle with a biography on Henry Ford, to which he claimed contained inaccuracies. Through a myriad of jobs, she barely kept herself afloat, and occasionally returned, often broke, to her parents’ home in Rocky Ridge, Missouri. Later, Lane took excerpts from her mother’s unpublished work, Pioneer Girls, and wrote them as her own stories for publication.
When her mother began writing her childhood story in the 1930’s, Lane became her mentor.  Lane’s domineering, and at times bullying approach is captured mostly in letters as she directed her mother’s business and financial affairs while also serving as her editor. Another peculiar pattern that lasted for four decades was the intermingling of finances between Lane and her parents. She constantly borrowed money from them, at other times gave them money, while incessantly advising them on how to manage their affairs. Her later interactions with men, including her “adoption” of a young man in Albania and later, an interesting bonding and grooming relationship with Roger Lea Macbride who later ran for president as the Libertarian Party candidate. Macbride inherited the book rights to Wilder’s valuable series from Lane after her death. Adam Smith speaks of the passions that can lead one to behave in irresponsible ways even though they may be aware of, or (in Rose’s case) raised in a home where prudent behavior was modeled. Lane’s life story presents a series of imprudent, spontaneous, passionate decisions.

The man who acts according to the rules of perfect prudence, of strict justice, and of proper benevolence, may be said to be perfectly virtuous. But the most perfect knowledge of those rules will not alone enable him to act in this manner: his own passions are apt to mislead him; sometimes to drive him and sometimes to seduce him to violate all the rules which he himself, in all his sober and cool hours, approves of. The most perfect knowledge, if it is not supported by the most perfect self-command, will not always enable him to do his duty. (TMS VI.iii.1)

Consideration of Lane’s state of mental health seems... prudent. The early 20th century was lacking in effective treatments for many mental health conditions. This was certainly the case in 18th century England and Scotland. Adam Smith often describes the antithesis to virtuous behaviors. Smith may have modeled his rich behavioral anecdotes on mentally challenged persons in his social circle. Fraser makes only a brief mention of the significant assumption by some scholars of Rose Wilder Lane’s possible bipolar condition. This sheds light on the whirlwind of events, moves, changes and frenetic description of the story of this fascinating woman’s life.
Rose Wilder Lane, Ayn Rand, and Isabel Mary Paterson each published a philosophical book in the same year, 1943. The Discovery of Freedom, The Fountainhead, and The God of the Machine contained similar themes of self-reliance, free will as necessary for liberty, Individualism, anti-feminism (each focused on strong male characters), and an anti-collectivist emphasis. Any representation of a group wielding power over an individual was the enemy, including taxation, planned economies and education. Fraser sheds light on yet another journalistic impropriety of Lane’s regarding the lack of originality of her own work, suggesting that the ideas for her book were heavily borrowed from a friend at the time, Isabel Paterson. (The friendship did not last.)
Was Rose Wilder Lane a hypocrite? An immoral person? Or was she unable to discern truth because of mental health challenges? How did her mental health affect her ideology, political leanings, and actual beliefs? Fraser’s story of Rose Wilder Lane is rich with details, but leaves the reader puzzled as to how this non-specialized, opportunistic journalist with a fuzzy grasp on truth became a central figure in launching the 20th century Libertarian movement.
With a renewed interest in her works and legacy, I’ll return to Lane’s books on freedom and liberty, but not her final book on American Needlework, nor her earlier panned biographies, nor her published short stories written by her mother.