Editor's Note: Please help us maintain this as a NO SPOILER space. References up to and including Infinity Wars and Captain Marvel are acceptable, but please no spoilers for Endgame. Thank you!
In our recent essay on Adam Smith and the Avengers, we had some fun labelling the Avengers according to Smith’s categories of Wonder, Surprise, and Admiration. We noted that:

All three of the words tell us how humans respond to various stimuli. Wonder is a response caused by “the new and singular.” Surprise is called forth by the “unexpected.” Admiration is a reaction to the “great or beautiful.”

We pointed to Captain Marvel as an exemplar of Wonder, which Smith says is our reaction to “all extraordinary and uncommon objects…all the rarer phaenomena of nature.” Hulk, for us, seems an ideal exemplar of Surprise—a reaction called for by the unexpected. And we argued that Thor’s otherworldly attractiveness and strength make him an obvious inspirer of Admiration.

We even made a chart: 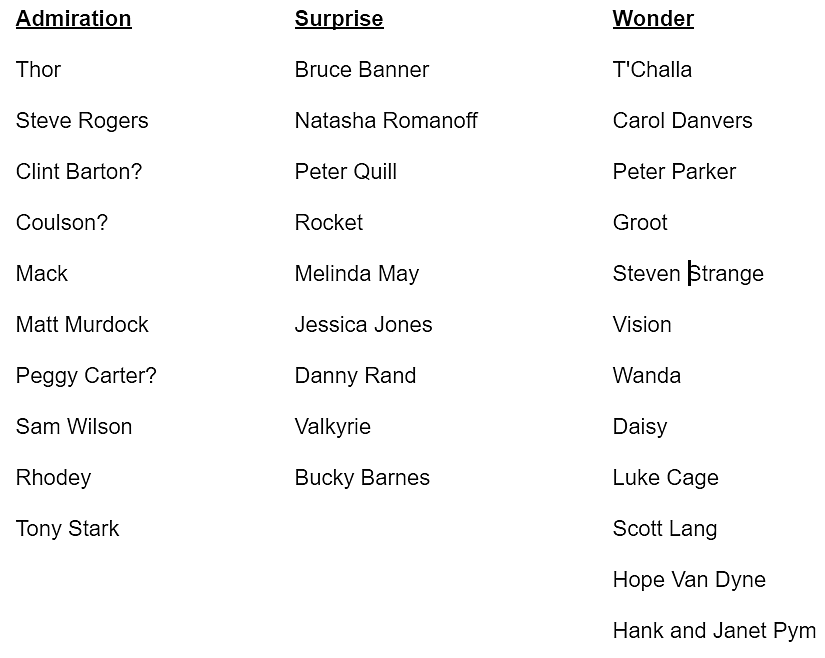 Now we invite you, in the grand tradition of philosophers and comic fans, and philosopher-comic fans, to tear the spreadsheet apart.
You can see we have doubts about where to put Clint Barton (Hawkeye) and Peggy Carter, for example. And there may or may not have been some backstage debate over whether Tony Stark inspires Admiration or Surprise.

We also considered making the categories more subtle by giving each character percentages for each category. Maybe Hulk should be 75% Surprise and 25% Wonder? Maybe we need a different category for folks who have prudence and practical wisdom at a superhuman level. (Would that solve the Coulson/Peggy Carter question?)

I think what's interesting about Peggy is that a big part of the dynamic on Agent Carter is between those who are constantly surprised by her abilities and those who admire them. (Or are they really surprised? There's a lot of resentment where admiration might otherwise settle.)

In the vein of missing categories... what about villains? Surprise and Wonder when they're encountered are pretty common, but admiration would be an odd term to use for Kingpin, Dormamu, or Thanos.

It would definitely be wrong to use admiration for villains, even when we're impressed by them (although maybe I'm now channeling my inner Aristotle rather than my inner Smith). I don't know what word works for "being impressed but not approving." Wonder definitely works for Dormammu!

To solve the villain conundrum, I wonder if the notion of disgust might help us? There’s no doubt to the power and awe that characters like Thanos invoke, but that awe carries with it an immediate dread, fear and loathing. Hence why disgust might be useful, and serve as an antithesis category to admiration.

I love that we're thinking about villains. They hadn't even crossed my mind when Aeon and I were writing this piece. I think it's right that the wonder/surprise/admiration categories won't work for the bad guys--especially the admiration category. They may need a completely separate rubric--where something like "astonishment" (in the old sense of being so shocked that it is as if one has been turned to stone) could parallel surprise in the heroic rubric, for example. I strongly suspect that Milton's characterization of Satan in Paradise Lost might give us some terms to play with. I'll poke around and see what I find.

I wonder if the characters might also alter between movies. Thor's character in most Marvel films does inspire "Admiration," but in the last one he changes and, with him, perhaps our response.

Yes, that's one of the great things about the what they've handled the MCU - there is character growth over the course of the series. And I think you're right about Thor, but I can't say more as we're in a spoiler-free zone.