Smith on Dealing with the Dread of Death 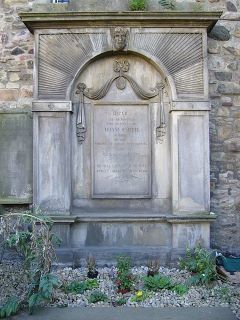 The second part of Professor Harpham's analysis of the problem of sympathy with the dead in Adam Smith's Theory of Moral Sentiments.
A problem emerges for Smith when humans try to extend to the dead our capacity for sympathy: There is nothing we can do to make the dead feel better; all we can do is let our imagination run wild. Imagining what it is like to be dead through sympathy is terrible because it makes us “miserable while we are alive.” (TMS I.i.I.13)
Interestingly, Smith does not conclude his discussion of the “dread of death” brought on by sympathy with some melancholic observation about humanity’s lot. Rather he notes that the dread of death may be “the great poison” to individual happiness, but it “guards and protects the society.” (TMS I.I.I.13) I find this conclusion curious for several reasons, but three stand out.
First, Smith unexpectedly shifts his discussion of the operations of sympathy from what is going on in an individual’s mind to a jurisprudential and societal level without explaining why this move is warranted. It is not difficult to construct an argument as to how the fear of death can be used to direct and control individuals in society by people in power. But Smith does not offer that or any other explanation, making the shift feel out of place here.
Other more fruitful lines of inquiry were open to him. For example, and this is my second point, Smith could have explored a theological argument about the operations of the sympathetic imagination with the dead. One might imagine a Christian arguing that sympathizing with the projected feelings of the dead person’s body makes no sense because the essence of the dead person is somewhere else and does not reside in the body any longer. Thus, one does not ever sympathize with a dead body but with the soul of that person who has escaped the pains and pleasures of this world. But there are conceptual problems with that line of argument from a Smithian perspective. Can one be a Christian and a Smithian?  Do dead people have actual passions or feelings that we might be able to sympathize with? Are passions of the mind, the body, or both? Given Smith’s highly materialistic theory of sympathy and the passions, it is hard to imagine him arguing that sympathy might enable us to experience fellow-feeling with non-corporal souls. In the end, Smith’s notion of sympathy probably must be seen as an all-too-human feature of our mortal body as it interacts with other mortal bodies.  That said, one can imagine why Smith, the friend of the “atheist” David Hume, chooses not to take the discussion in this direction.
Third, Smith could have turned his discussion into a more secular one about the dread of death by highlighting the potential problems that flow from our capacity for sympathy. He could have stressed how a misguided and uncontrolled sympathy with the dead can create illusions of the imagination that leave us miserable and lonely, grieving the loss of friends and deprived of life-enhancing fellow-feeling. Oddly, Smith’s discussion of the dread of death and its larger meaning for social order at the end of Chapter 1 do little to help us confront in our everyday lives “the great poison” death poses to human happiness.
Elsewhere in The Theory of Moral Sentiments Smith does provide us with some practical insights about how to deal with the fear of death in very specific circumstances. His lengthy analysis of the virtue of self-command that is added as part of Part VI of the final 6th edition of The Theory of Moral Sentiments in 1790 suggests how some individuals might be able to manage sympathy and diminish the dread of death. In war, he argues, individuals can become familiar with death and “cured of the superstitious horror with which (death) is viewed by the weak and unexperienced.” (TMS VI.iii.7) On the battlefield, cultivating self-command and sensitizing ourselves to the complexities of the operations of sympathy may provide an approach to malfunctioning sympathy that is better than existential angst or traditional religious doctrine. As to whether this approach offers solace to the average person outside conditions of war is another matter. Taming the dread of death may be something only available to those few stoical individuals who have mastered the virtue of self-command.

Edward J. Harpham, Reflections on Smith's Sympathy and the Dread of Death
Kevin Stucker, Sympathy and Spectatorship in Adam Smith: A Collection