Sympathy and Spectatorship in Adam Smith: A Collection 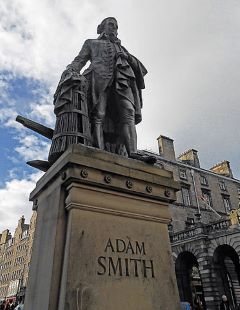 One of Liberty Fund's 2021 Summer Scholar Interns compiles a list of essential readings on Adam Smith and his core concepts of sympathy, spectatorship, and virtue.
Liberty Fund was pleased to recently welcome interns into the organization for the first time since before the coronavirus pandemic. As one of their first tasks, we asked our new associates to compile a list of articles from across our sites on Adam Smith and his life, ideals, and legacy. This collection, by Kevin Stucker, a rising senior at Hillsdale College, comes out of his previous study of Smith’s Theory of Moral Sentiments, and speaks to the role of sympathy and the impartial spectator in the moderation of our human passions, interests, and desires.

Hume, Smith... and Darwin
I found this article interesting because it illuminates a critical difference between Hume’s and Smith’s visions of “sympathy.” When reading Hume I found myself to be not fully convinced by his description of sympathy as an involuntary reflection—something beyond the scope of intentional reason. However, as Schwartz notes, Smith allows for reflection through the function of the internal spectator; one must intentionally reflect or judge their affections in relation to propriety. Sympathy is not merely a “contagion.” In addition, Schwartz gives consideration to Smith’s time as a bureaucrat, especially his surprising dedication to executing the duties of the post. While I have heard this story before, upon this reading I am reminded of the passages about the “man of system” in TMS and think that Adam Smith may have taken his own advice: instead of attempting far-reaching, drastic reforms in the Customs House as a man of system would desire to do, Smith instead executed his responsibilities as best he could in the framework of his historical time and place.


Adam Smith and the American Founding
Before reading Morgan Smith’s article, I had never quite considered that there may be similarities between Smith’s thoughts on happiness and the Declarations’ right to the “pursuit of happiness.” The latter I view as being derived from the Aristotelian conception of happiness—a life of happiness being a life of virtue. Is this life of virtue dissimilar from Smith’s conception of happiness? When Smith claims that man desires to be lovely more than to be merely loved, is he not harkening to a similar idea of a virtuous life—that man is more content when his internal spectator determines himself to be worthy of praise? However, as Morgan Smith notes, Adam Smith conceives of man as a creature of affection, and not necessarily of reason. Is this not in tension with the classical idea of man as the rational animal? Perhaps not. After all, Aristotle claims that man is political; he utilizes his reason to engage in deliberation with his fellow citizens of the polis. Is affection not a critical component to the political community? Affection is necessary for moral development, as without it, there could be no hope for political life at all—the polis would simply be a loosely bound collection of individuals with no significant ties to one another. The ideas of Aristotle, the Founders, and Smith are not as disparate as they may seem.

Quarantining With Adam Smith
Nicole Penn illustrates the Smithian consequences to a pandemic lockdown: when separated from others, we are not able to engage with the sentiments that are necessary for the formation of a functional morality. Penn particularly highlights social media’s own faults in this process, as it shallowly attempts to fill human interaction’s abdicated role in the development of moral sentiments. She even shows how Smith would be unsurprised by social media’s prevalent role in our world today, as Smith knew that one of the strongest desires of man was to lead, direct, and persuade people. Even so, I think that social media represents the complete corruption of Smith’s system of sympathy—after all, it literally quantifies and rewards you for the number of people you can lead, direct, and persuade; it taps into this base desire and rewards us for satiating it. Smith valued liberty in social interactions because we need to let his system of moral sentiments function without obstruction. When the king seeks advice from his court of flatterers, can he ever hope to receive an unbiased response? Yet when the common man interacts with his equal, he can expect the unbiased operation of each man’s impartial spectator, leading to a productive exchange of sentiments. However, social media increasingly steals us away from these personal interactions thereby distorting the exchange of moral sentiments.


Adam Smith on Capitalism and the Common Good
In this article, Matson demonstrates that Smith believes man serves the common good best when he directs his attention towards his own personal pursuits. Man cannot directly and perfectly serve universal benevolence because he does not possess universal knowledge—man is not God. Interestingly, this would seem to suggest that man acts humbly when he abandons his pursuit of improving the common good and instead serves those areas where his knowledge is most complete—himself, his family, his friends, and his immediate community. The condition of man is such that he cannot obtain universal knowledge to perfectly serve the common good—to believe that one could do so would be to reject humanity’s limited nature. I would suggest that attempting to command the common good using one’s own limited knowledge is the most selfish act one could commit; it is a rejection of man’s limits through the overestimation of one’s knowledge and power, presumably for the reward of widespread praise. It is the epitome of selfishness.

Economics and the Ordinary Person: Re-reading Adam Smith
Fleischacker makes an interesting observation about Smith that I had never quite considered: Smith was a somewhat radical academic for his time (not just because of his associations with Hume). For a period where leading scholars and politicians would repeatedly advocate for government control over the personal decisions of the “commoners,” Smith’s support for the freedom of all individuals would have been avant-garde. A system allowing even the uneducated to pursue their perceived self-interest is far superior to a system where more “learned” men attempt to control every aspect of a citizen’s life. Furthermore, I thought Fleischacker’s insight into the well-known butcher and baker story to be enlightening; when Smith advocates for man to pursue his self-interest, he is also advocating for man to inevitably participate in society and in trade, which will force him to enter into the exchange of moral sentiments that ultimately fosters a greater sense of morality. In a free, virtuous society, the pursuit of self-interest necessitates the extension of the affections to others; one must convince his fellow man to satisfy his desires without force or coercion. A true pursuit of selfish interests would never respect the rights and freedoms of other men.

From the Archive: Smith on Liberty
Bargaining with the Butcher, Baker, and Brewer: A New Look at Adam Smith's Most Famous Sentences