The Bard and The Professor: Adam Smith’s Influence on Robert Burns 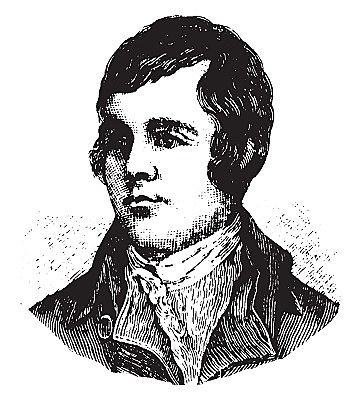 One of the great miracles of the early modern period was sheer breadth and depth of genius produced in mid-18th century Scotland (I beg David Hume’s indulgence for my reference to miracles). The Scottish Enlightenment remains unique not only in the number of great thinkers produced, but the variety of fields they contributed towards: philosophy, economics, history, aesthetics, theology, and art. Of the many figures from mid-18th century Scotland, Hume and Adam Smith stand as giants, especially for those engaged in economics, philosophy, and political thought. Yet for the people of the Scotland, the most familiar and celebrated figure of the age remains Robert Burns.
Widely regarded as Scotland’s national poet, Burns is often referred to as simply “The Bard.” In his brief thirty-seven years, 1759-1796, Burns became a sensation, publishing poems and songs in both English and Scottish Gaelic. As recently as 2016 Burns was overwhelmingly voted as the greatest Scot by the public. He declared himself a simple “peasant poet,” but this was an understatement of gross proportions. The fact he remains so popular, both home and abroad, more the two-hundred years after his death is a testament to his mastery of self-promotion, while the intelligence of his poetry shows he was a “well read and reasonably educated” young man.
Burns explored various themes in his poems, including Scottish history, folklore, and nationalism, while also producing poems about romance and nature. Throughout his writings Burns also engaged the political and philosophical issues of his era. He became known as a radical for many of his views, a title even more fitting considering some of his recently discovered letters. While his personal relationship with slavery was complex, poems such as “The Slave’s Lament,” demonstrated his opposition to the slave trade. The egalitarian and humanist philosophy Burns imbedded in his poetry influenced Fredrick Douglass and Abraham Lincoln.
Yet genius as he was, the ideas Burns expressed in his poetry were not made in a vacuum. As noted above, Burns was a “well read” young man, who spent his life in Scotland during its most intellectually vibrant eras. No doubt his influences were legion, but one thinker who profoundly impacted Burns was Adam Smith.
Smith’s first book, The Theory of Moral Sentiments (TMS), was published a few months after Burns was born in 1759. Historian Benjamin Wilkie argues TMS was likely how Burns was introduced to Smith noting “Smith’s Theory of Moral Sentiments was a popular book, and Burns likely first encountered it in his father’s library in its first edition from 1759.” Smith made quite the impression on Burns (it appears the two never had a chance to meet in person, though they were at times near one another). Wilkie points out “Burns purchased a copy of the book’s sixth edition in 1790” and “shared copies with his friends, too.”
Smith’s The Wealth of Nations (TWN) was also a favorite of Burns. In a letter sent on May, 13 1789 Burns thanked his friend and patron Mr. Graham of Fintry for sending a bundle of books. While one book was missing, Burns told Graham “tis no matter” for he had plenty to keep him interested, “particularly that extraordinary man, Smith, in his Wealth of Nations, find my leisure employment enough. I could not have given any mere man credit for half the intelligence Mr. Smith discovers in his book.” Burns continued he “would covet much to have his [Smith] ideas respecting the present state of some quarters of the world that are, or have been, the scenes of considerable revolutions since his book was written.” Two months later, Burns again wrote Graham, promising to “return your books very soon.” He only wished “to give Dr Smith one other perusal, which I will do in two or three days.”
Beyond his private correspondence the influence Smith had on Burns is evident in the latter’s poetry. One example comes in Burns’s poem “To A Louse”:

O wad some Power the giftie gie us
To see oursels as ithers see us!
It wad frae mony a blunder free us,
An' foolish notion:

Gavin Kennedy includes an entire chapter on this poem in his book Adam Smith’s Lost Legacy. Kennedy translates the above from Scots to English as: “We would save ourselves from many a blunder and foolish notion if only we could see ourselves as others see us.” While Burn reveals a more pessimistic view than Smith, Kennedy points out this “poem is a way into Smith’s ‘impartial spectator.’”
The most obvious example of Smith influencing the poetry of Burns can be found in Burn’s commonplace books. Here Burns recorded private personal observations and reflections. The first he started in 1783 was not intended for publication, and one of the earliest entries from September finds Burns musing on TMS:

“I entirely agree with that judicious philosopher, Mr. Smith, in his excellent Theory of Moral Sentiments, that remorse is the most painful sentiment that can embitter the human bosom. Any ordinary pitch of fortitude may bear up tolerably well under those calamities, in the procurement of which, we ourselves have had no hand; but when our own follies, or crimes, have made us miserable and wretched, to bear up with manly firmness, and at the same time have a proper penitential sense of our misconduct-is a glorious effort of self-command.”

The passage from TMS Burns endorses from Smith regarding remorse comes in part two of the book. Burns was so struck by Smith’s ideas that immediately following the above reflection, he penned a poem on the topic, later published under the title of “Remorse”:

“Of all the numerous ills that hurt our peace,
That press the soul, or wring the mind with anguish
Beyond comparison the worst are those
By our own folly, or our guilt brought on:
In ev'ry other circumstance, the mind
Has this to say, "It was no deed of mine:"
But, when to all the evil of misfortune
This sting is added, "Blame thy foolish self!"
Or worser far, the pangs of keen remorse,
The torturing, gnawing consciousness of guilt-
Of guilt, perhaps, when we've involved others,
The young, the innocent, who fondly lov'd us;
Nay more, that very love their cause of ruin!
O burning hell! in all thy store of torments
There's not a keener lash!
Lives there a man so firm, who, while his heart
Feels all the bitter horrors of his crime,
Can reason down its agonizing throbs;
And, after proper purpose of amendment,
Can firmly force his jarring thoughts to peace?
O happy, happy, enviable man!
O glorious magnanimity of soul!

Burns’s poetry continues to inspire and gain new fans in every generation. For everyone Burns impacts, we should say they were also impacted by Adam Smith, for without him, Burns may have never become The Bard of such renown. In an earlier piece on the relationship of Smith and Edmund Burke, I quoted Burke’s review of TMS: “His language is easy and spirited and puts things before you in the fullest light; it is rather painting than writing.” Smith may have been able to paint through words his moral philosophy, but in Burns’s poetry, his philosophy sang.