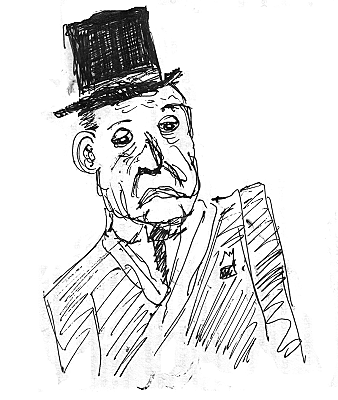 Maugham's story is worth a read for entertainment, but it also highlights an important aspect of commerce: the necessity of sympathy.
Let me tell you a story:


It seems there was this certain parish in London: St. Peter’s in Neville Square. A man by the name of Albert worked as a verger there (a verger is the caretaker of the church). A new vicar was brought into the parish church. He found out the verger was illiterate and offered to teach the verger to read as he wanted a literate caretaker. The verger declined, feeling he was too old to be taught a new trick, and resigned his position. On his way home, he desired a smoke and a candy, but finding no store, he left disappointed. His observation stuck with him throughout the day, however. That evening, he alighted on the idea that he could not be the only man who wanted smoke and sweet as he walked down that street, so he decided to open a store. The store became a huge success. One day when making a deposit, the former verger asked the bank manager for help filling out the paperwork as he was illiterate. The manager was surprised: “Sir, imagine what you would be doing if you could read!” he proclaimed. “I know what I would be doing,” responded Albert. “I’d be the verger at St. Peter’s.”


This is a paraphrased version of The Verger by W. Somerset Maugham. The story is worth a read for entertainment, but it also highlights an important aspect of commerce: the necessity of sympathy.


The success of the verger came with the realization not of his own wants (a smoke and a sweet), but with the realization that his wants were likely in sympathy with the wants of other people. He possessed sympathy with his fellow people, allowing him to be successful by appealing to their wants and desires. If the verger’s actions were based solely on self-interest, he would have remained disappointed with his inability to get a smoke and a sweet. Self-interest alone would be insufficient for him to see that other people could want the same thing he did. To be clear, self-interest does play into the situation: the verger does not give away his products and he may have been spurred to action to open his shop to improve his life situation. His motivation may have been self-interest, but the natural sympathy that occurs in each man “[h]ow selfish soever [he] may be supposed” (TMS 1.1.1.1) is what allowed him to be aware of such a potentially beneficial situation.


Adam Smith’s economic thought is often tied up, mistakenly, with the concept of self-interest. As Sarah Skwire notes in a recent Speaking of Smith, Adam Smith took great pains to distance himself from the “licentious” system of Bernard Mandeville, who did proclaim that private vices (like selfishness) lead to public benefits. What separates Smith from Mandeville is sympathy.


Consider the famous example Smith uses in the Wealth of Nations: “It is not from the benevolence of the butcher, the brewer, or the baker, that we expect our dinner, but from their regard to their own interest. We address ourselves, not to their humanity but to their self-love, and never talk to them of our own necessities but of their advantages” (WON I.ii.2). Emphasizing the words “interest” and “self-love,” people conclude that Smith’s economic theory is that of self-interest. Standing in contrast to the sympathy discussed in The Theory of Moral Sentiments, this suggests a dual world of Adam Smith.


But, as we see from the story of the Verger, self-love is insufficient to promote general well-being. If we look at Smith’s parable of the brewer, butcher, and baker through the lens of sympathy something interesting comes to the fore. Yes, if we want our dinner, we must appeal to the butcher, baker, and brewer. But, likewise, they must appeal to us. Before we can appeal to their interest, they must be offering something that we want. In other words, if the businessman wants to be successful, he cannot be solely self-interested. He cannot be entirely vicious and have it lead to public virtue. The apparent duality of Smith falls away once we read the parable through the sympathetic lens.


The businessman must sympathize, in the Smithian fashion, with his clientele in order to be successful. F.A. Hayek points out that the purpose of competition is to teach us who will serve us best (97). How does the businessman show he can serve us best? By having his sentiments most in line with ours. This truth stands whether one is improving current offerings or offering something new. The businessman must know what customers want, what they value, or what they may likely value. He does that not through opinion polls, but through sympathy.


The Wealth of Nations cannot be fully understood and appreciated without the lens of The Theory of Moral Sentiments. Sympathy lies at the foundation of many of our behaviors, including those that seem prima facie selfish. If one is truly vicious in private, if his “man within the breast” lacks proper direction, then his actions cannot easily lead to public virtues. To the extent that private vices do lead to public benefits, it is coincidental rather than “guided by an invisible hand.” The invisible hand is a sympathetic one.