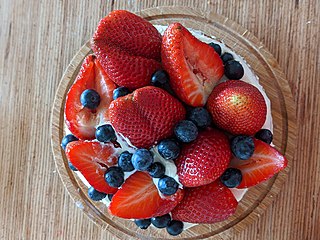 Learn about Smith's sugar-lump habit, and how to make the eighteenth-century English equivalent of strawberry shortcake, "Strawberry Fool."
One can almost imagine Adam Smith from the descriptions we’re fortunate enough to have. While many accounts paint him as absentminded or lost in thought, as he no doubt often was, others portray him as a lively host and clever conversationalist.
In Rae’s classic Life of Adam Smith, we have accounts from Samuel Rogers who later shared them in his Recollections of the Table-talk of Samuel Rogers. “He is a very agreeable man and I should have dined and supped with him every day, if I had accepted all his invitations.”  Another observer said “He was extremely communicative … and delivered himself on every subject with a freedom and boldness quite opposite to the apparent reserve of his appearance.”
In 1787, Smith had been appointed Commissioner of Scottish Customs and acquired Panmure House at Canongate in Edinburgh. He moved his mother and cousin, Janet Douglass, from Kirkaldy who served as housekeeper and hostess for Smith. During this time, Sunday night was the time to stop in for dinner as his home was open for his famous Sunday suppers, a sort of Enlightenment version of a French salon where the thinkers, writers, and honored guests of the day were able to gather, debate, and exchange ideas.
(Today, his home is newly renovated and open including the second-floor dining room which was the site of these famous gatherings. Can you imagine who must have gathered around that fireplace?)
It’s at one of these dinners we hear the story of Smith’s sweet tooth. He was in the habit of sneaking sugar lumps from the sugar bowl so much so that his cousin, Miss Douglas, had to intervene. As Smith biographer David Daiches Raphael notes, “At his Sunday supper parties Miss Douglas would place the sugar - bowl on her lap after a time in order to halt his raids upon it.”
One can imagine the merry Smith at home on a Sunday evening surrounded by friends and colleagues, and sneaking sugar lumps from the bowl before it’s taken away.
For those who, like Smith, enjoy a sweet treat from time to time, here’s a recipe from the era that Smith very likely enjoyed. As a member of the Boodles Club in London, Smith would have visited their original location on Pall Mall and their new home on St. James’s Street after they moved in 1782. According to The Lost Foods of England, The Boodle’s Fool was a delight of cake and cream whipped with orange, lemon, and sugar, then chilled.
What’s the difference, you ask, between a fool, a trifle, and a parfait? While they have evolved over time, one could generally say a fool was cake with whipped cream, a trifle was cake with custard and whipped cream, and a parfait involved frozen custard (or ice cream). We don’t see fools or trifles (or even pudding) in the US much, but in honor of Smith, you could try this updated version featuring Smith’s favorite summer fruit, strawberries. It’s perfect for a hot summer evening and not too different from the American favorite, strawberry shortcake.
Strawberry Fool with Pound Cake
(Makes 6)
1 qt ripe strawberries
1 tbsp sugar
Juice of ½ an orange
1 cup cream
¼ cup sugar
Zest of 1 lemon, 1 orange
6 slices pound cake, ½ inch thick, plain or lemon flavored
Orange zest for serving