What Adam Smith Ate: A Tribute to Strawberries 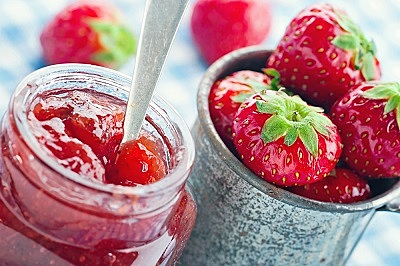 November 2, 2020
In July 1789, just a year before his death. Adam Smith, Commissioner of Scottish Customs since 1778, was living at Panmure House just next to Canongate Kirk in central Edinburgh. He had lost his mother only five years before. Smith would die in July of the following year.


By now, the economist was known for hosting his popular Friday night dinners, lively gatherings of philosophers and economists, as well as gatherings of the Oyster Club (a social club of Enlightenment fellows). He frequently hosted all kinds of guests, but on one particular morning, July 15, 1789, a visitor found him alone.


Samuel Rogers, just 26-years old and three years from publishing his acclaimed book, The Pleasures of Memory, had arrived in Edinburgh on July 14, 1789. Smith biographer John Rae notes that it was indeed “that momentous 14th of July 1789 which set the world aflame, though not a spark of information of it had reached Edinburgh…” Rogers called upon Smith the next day, on Wednesday morning, July 15, and found Smith alone at breakfast, eating a simple dish of strawberries.


As a businessman and literary celebrity, Rogers spent a lifetime recording these kinds of small meetings with his friends, from physician Charles Fox and philosopher Edmund Burke to political luminaries like Tallyrand and the Duke of Wellington. (His nephew would later oversee publication of his table talk collections.)


Morning calls were a perfect time to visit if you were new to town and had a letter of introduction, which Rogers did. Smith welcomed him, and they discussed strawberries. Smith told Rogers they were his favorite fruit to eat in the summer. As they sat together, Smith expounded on the “superior flavour” of Scotland’s excellent strawberries, noting that as a northern fruit they were at their best from Orkney, the chain of islands connected to the north of Scotland.


As it turns out, strawberries from Scotland are indeed famous. Modern food writers note that Scottish berries are the best because of the temperate climate and longer daylight hours. In high demand in Europe in June, they ripen more slowly which helps them produce more sugar yielding a sweeter and more tender berry.


In the 18th century, most household cooks were used to preserving fruit in season, so it is likely that Smith’s mother and later cook would have done the same (especially since the berries were his favorite.) Sugar was plentiful and cheaper by then, and it acted as a preservative making jam a practical indulgence.


The 1789 method for making strawberry preserves wouldn’t be what home economists call “food safe” today, so I’ve given you an updated version. Try making it with fruit from your local organic market, then again in the summer when fresh strawberries are in season for a delightful comparison. Slathered on scones, oat cakes, or English muffins, you can imagine a simple summer breakfast with Adam Smith.


2 quarts of strawberries, washed, hulled, and sliced (about 5 cups)