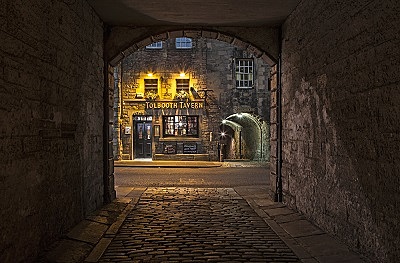 Read the first post in our What Adam Smith Ate series.

By the mid-1750s, Edinburgh was not only a bustling city, it was an enlightened one. Home to many of the top scholars of the day, the city was known for its equality, housing people of all classes and trades together. At least one noble scholar notes that a tradesman might have quarters in the same building as a reputable family, which was unusual through the rest of England at the time.


One can imagine stone streets, wooden buildings, cobblers, bakers, tailors, printers, and any number of other kinds of residents going about their daily business. Members of households bought bread, horses and carriages filled the streets, and people from all walks of life frequented taverns.


Taverns were the gathering places of the day where a traveler or a local could have a hearty meal, a pint (or a dram), and gather with friends. Travelers stopped there, local residents did business there, and everyone exchanged the news of the day. Today, the tavern (or modern pub) still fills an important role in most Scottish towns. For gentlemen who were friends, it was a place to gather for a meal, perhaps in a private room with heavy plates of food brought up from the kitchen by the tavern-keeper’s wife.


The Reverend Doctor Alexander Carlyle, a Scottish clergyman, Minister of Inveresk, and contemporary of Adam Smith, David Hume, and other key figures of the day, gives us an account of one such jolly dinner with a rowdy bunch of friends. His account dates from the mid-18th century when he notes that Hume was writing The History of England. Carlyle and his companion, finding themselves in town for supper, sent their “caddies” or messengers out and “assembled our friends to meet us in a tavern by nine o’clock. And a fine time it was when we could collect David Hume, Adam Smith, Adam Ferguson, Lord Elibank, and Drs. Blair and Jardine on an hours’ warning.”


We know that Smith liked a joke and was quite sociable in company. We can imagine him as that quiet but merry friend we all have, content to watch everyone and popping up with a quip or comment when called upon. What a pleasant way to pass an evening with great friends and food, merriment, conversations, ideas, and, naturally, a hearty tavern meal.  Meat, seafood, gravy, roasted vegetables, bread, beer and wine – usually claret, which we would now call Bordeaux -- would have been plentiful. Roasted fowl was a staple, including chickens that were most commonly boiled due to their age. (Young chickens were kept for laying.)


Elizabeth Cleland gives us a great recipe for what she calls “Chicken Royal” but, unlike her original recipe, we won’t make you pull out your larding needles to prepare the bird. (Larding needles are long, thin implements designed to insert small pieces of fat into meat before roasting.) Her recipe calls for a mushroom “ragoo” which is the 18th century English spelling for the French “ragout” (like the Italian “ragù”), quite simply a stewed sauce.  We’ve adapted Cleland’s recipe for the modern cook.

Chicken Royal (or Chicken and Mushrooms)