Where Turnips Turn Up in Adam Smith's World 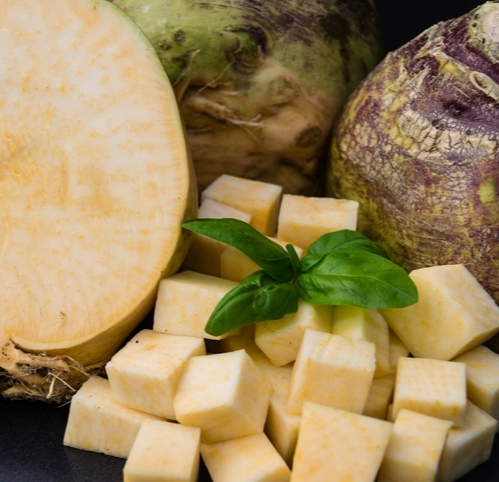 During Smith’s lifetime, he saw widespread changes in agriculture including land use, grain production, and the humble turnip was on the leading edge of this revolution.

You may be familiar with today’s white turnip, a large, starchy root vegetable that can be a little spicy if left in the garden for too long. In the UK, you’ll also often find “Swedes” or Swedish turnips. Cooks in the U.S. call them rutabagas.


Before widespread cultivation of the potato, turnips were one of the most commonly farmed vegetables in the 18th Century. They could be easily stored in cool, dry places over the winter. They could be pickled or preserved, boiled and mashed, and they could even be fed to livestock. During Smith’s lifetime, he saw widespread changes in agriculture including land use, grain production, and the humble turnip was on the leading edge of this revolution.


Turnips did well in poorly drained land and could be grown in large, mounded ridges “without hoeing” which made them popular with landowners who didn’t want to invest in proper drainage, modern farming techniques, and labor. These landowners relied on poorly paid tenants who did the minimum amount of work required to produce the root vegetables, giving rise to “turnip culture” by the mid-18th century. “Turnip culture” became a shorthand insult for old-fashioned landowners who simply let their tenants continue eking out a living depleting the land with inefficient production of turnips.


Innovative landowners saw opportunities for efficiencies and improvements for their estates and their tenants. The author A. Young reports in his book, Northern Tour in 1771 on the Marquis of Rockingham surveying his lands in Yorkshire where he observes “slovenliness and bad husbandry” especially as it results to production of turnips. After adding drainage and new farm managers who advocated working turnip crops with hoes, Young notes “This … by degrees introduced the practice which is now the common practice of all the good common farmers.”  It was also profitable.


While Rockingham was acting “with greater spirit than the improvement of the turnip culture,” improvements were also underway at Dalkeith, the estate of Adam Smith’s future ward, the young Duke of Buccleuch. In 1755, Charles Townsend married the Duke’s mother – a widow – and began improving the Duke’s estates in Scotland. Townsend came by some of his agricultural knowledge via his grandfather, a successful agricultural innovator making his name in, you guessed it, turnips. (He was known as “Turnip” Townsend for his published work on the subject.)


Townsend followed Smith’s work and eventually engaged him to serve as a tutor for his stepson’s European Grand Tour. Through Smith’s lifelong friendship with the Duke and annual visits to Dalkeith, he was able to observe first-hand the results of these innovations for the tenants and the local economy. [Third Duke of Buccleuch and Adam Smith: Estate Management, Brian Bonnyman, 2014]


As Smith would later write “Things were formerly never raised by the spade but which are now commonly raised by the plough” and turnips were a prime example. In the 18th Century, Scottish turnips were considered the most desirable especially as the yellow turnip or “Swede” became popular.


It’s likely Smith was quite familiar with turnips in all their forms some of which are described by Scottish poet Tobias Smollet in his epistolary novel The Expedition of Humphry Clinker (1771).

“Sure enough, I have seen turnips make their appearance, not as a dessert, but by way of hors d'oeuvres, or whets, as radishes are served up betwixt more substantial dishes in France and Italy. But it must be observed that the turnips of this country are as much superior in sweetness, delicacy, and flavour, to those of England, as a musk melon is to the stock of a common cabbage.”

“Neeps” turnips are still called to this day in Scotland were generally boiled and mashed but could be pickled or eaten raw. It’s common to find mashed turnips served with mashed potatoes as the ubiquitous side dish “neeps and tatties” and often served with haggis.


Most modern recipes today call for making mashed turnips the same way that Americans would make mashed potatoes. Just in case you need a little help along the way, here’s a recipe for you.

Serve side by side with mashed potatoes or swirled onto the same plate. For variety, you can serve swirled with mashed carrots or parsnips. You can also top your mashed turnips with chopped cooked bacon, chives, or green onions.


Want to read more?
Previous posts in our "What Adam Smith Ate" series
Paul Schwennesen's Speaking of Smith post on "The Future of Farmers"