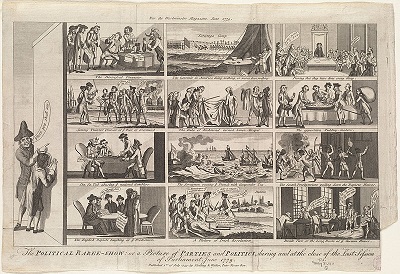 Smith had both understanding of and insight into political parties, and while he spoke candidly about their harmful effects, he also believed that they could play an important role in reforming abuse and securing tranquility and happiness in the state.
Adam Smith believed party spirit to be destructive of his moral system as set out in The Theory of Moral Sentiments (1759). ‘Of all the corrupters of moral sentiments…faction and fanaticism have always been by far the greatest’, he wrote. The reason was that ‘[a] true party-man hates and despises candour; and, in reality, there is no vice which could so effectually disqualify him for the trade of a party-man as that single virtue.’ ‘The…impartial spectator’, Smith continued, ‘is, upon no occasion, at a greater distance than amidst the violence and rage of contending parties.’ Smith highlighted that party spirit inevitably came to dominate political life and engulfed nearly everyone, since those who remained detached would have little sway over public affairs. He was convinced that only ‘a very few’ would be able to ‘preserve their judgment untainted by the general contagion’ and ‘[t]hey seldom amount to more than, here and there, a solitary individual, without any influence of either party, and who, though he may be one of the wisest, is necessarily, upon that very account, of the most insignificant men in the society.’ Consequently, ‘[t]he animosity of hostile factions, whether civil or ecclesiastical, is often still more furious than that of hostile nations; and their conduct towards one another is often still more atrocious.’


In the conclusion of the Wealth of Nations, when Smith discussed the possibility of a parliamentary union between the thirteen colonies of America and Britain, he argued that one of the benefits of such a union was that the colonies would escape the ‘spirit of party’, a spirit ‘which commonly prevails less in the remote provinces than in the centre of the empire.’ London would be the center stage of factional disputes and party rage. ‘The distance of those provinces from the capital, from the principal seat of the great scramble of faction and ambition,’ Smith continued, ‘makes them enter less into the views of any of the contending parties, and renders them more indifferent and impartial spectators of them all.’ The prime example before Smith’s eyes was his native Scotland, which as a result of the Acts of Union of 1707 had abolished the notoriously factious Scottish parliament. ‘The spirit of party prevails less in Scotland than in England’, Smith concluded, leaving no reader in doubt that this was a great advantage in his mind.  Smith believed that the colonies would enjoy ‘a degree of concord and unanimity at present unknown in any part of the British empire’ if they entered the union he proposed. Of course they did not, but this was an exemplary rather than a practical proposal, as he kept this section in the third edition of the Wealth of Nations, published in 1784 after the colonies had become independent.


It is important to point out, however, that Smith was not a categorical enemy of party. In a qualifying remark in The Theory of Moral Sentiments, he wrote that ‘[f]oreign war and civil faction are the two situations which afford the most splendid opportunities for the display of public spirit.’ Success in the former would ‘almost always’ attain a ‘more pure and more splendid’ glory than the latter, however, as the war hero would be celebrated by the entire nation, while ‘the leaders of the contending parties, though they may be admired by one half of their fellow-citizens, are commonly execrated by the other.’ The paragraph that follows is striking:

The leader of the successful party, however, if he has authority enough to prevail upon his own friends to act with proper temper and moderation (which he frequently has not), may sometimes render to his country a service much more essential and important than the greatest victories and the most extensive conquests. He may re-establish and improve the constitution, and from the very doubtful and ambiguous character of the leader of a party, he may assume the greatest and noblest of all characters, that of the reformer and legislator of a great state; and, by the wisdom of his institutions, secure the internal tranquillity and happiness of his fellow-citizens for many succeeding generations.

The paragraph shows that for all his dislike of parties, Smith was not prepared to offer unreserved criticism. It is possible that Smith in this instance thought of his friend Burke, who had not yet broken off his connection with his party at this stage. When Rockingham died in 1782, Smith, in London at the time, wrote a letter of condolence to his friend Edmund Burke (a member of the Rockingham Whigs), in which he expressed his ‘hope and trust that you will exert your usual firmness and that your friends and you will immediately plight unalterable faith to one another, and with unanimous consent chuse a leader whose virtues may command the same confidence with that which you all had in the worthy man whom it has pleased God to take from you.’


This letter shows that Smith had both understanding of and insight into party politics. Smith never advocated anything as radical and unrealistic as the abolition of parties. Presumably he agreed with his friend David Hume that it would not have been practical, however unpalatable and pernicious extreme factionalism could be. He also agreed with his friend Burke that party leaders, if they managed to prevail upon their party friends to act with moderation, could render essential and important services to their country by reforming abuse and securing tranquility and happiness in the state.


Read more about party in the eighteenth-century in Max Skjönsberg, The Persistence of Party: Ideas of Harmonious Discord in Eighteenth-Century Britain (Cambridge: Cambridge University Press, 2021).


All references in this blog are to the Glasgow Edition of the Works and Correspondence of Adam Smith, republished by Liberty Fund.


Paul Sagar, The Opinion of Mankind: Sociability and the Theory of the State from Hobbes to Smith (Princeton: Princeton University Press, 2018).
Shanon FitzGerald, Resisting the Corruption of Fanaticism
Sarah Skwire, Something Worse than Faction