A Modern Lawyer and Smith’s Lectures on Jurisprudence, Part 3 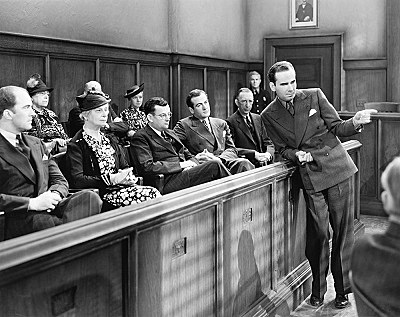 Pop quiz: In his 1766 Lectures on Jurisprudence, Adam Smith asserts that “[t]he law of England, always a friend to liberty, deserves praise in no instance more than in the careful provision of” which civic body? [425].
Hint: Smith also says “[n]othing can be a greater security for life, liberty, and property than this institution.” [Ibid.]
Still stumped? Here’s a final clue: The American Bill of Rights devotes more words to this institution than any other subject, yet we have almost completely purged it from our system of government.
If you guessed “juries,” you’re right. And if you didn’t realize they are practically extinct on the North American continent, then you should, because it represents an ongoing disaster, particularly for America’s hyper-carceral criminal justice system.
More on that shortly, but first let’s return to Smith. As previously noted, most of his lecture on Justice is a disquisition on the history and substance of English common law, which is the case-by-case accretion of a body of rules for resolving disputes and redressing injuries. But as Smith explains, it is not enough to simply produce an equitable set of laws; those laws must be applied in a way that is fair as well—and the way they did that in 18th century England was with juries. Why juries instead of, say, lifetime appointed, independent judges? [422]. The two great virtues of juries are first that they consist of people who have no dog in the fight, whether the case involves a civil suit between private parties or the criminal prosecution of a private citizen by the government; and second, because they lend the imprimatur of consensus-based legitimacy to the end result of a legal proceeding.
Thus, Smith observes (albeit somewhat aspirationally) that “[a] crime is always the violation of some right.” [476] The injury it causes “naturally excites the resentment of the spectator, and the punishment of the offender is reasonable as far as the indifferent spectator can go along with it. This is the natural measure of punishment.” [475] (emphasis added). Smith then provides a historical illustration of the key role that juries play—or, more precisely, were meant to play—in preventing the abuse of power by an unjust sovereign:

Wool in England was conceived to be the source of public opulence, and it was made a capital crime to export that commodity. Yet tho’ wool was exported as formerly and men were convinced that the practice was pernicious, no jury, no evidence, could be got against the offenders. The exportation of wool is naturally no crime, and men could not be brought to consider it as punishable with death. [475]

He’s talking here about jury nullification, which is more precisely called “conscientious acquittal” since juries lack the power to “nullify” anything and can only refuse to convict a particular defendant under the facts of a particular case. By whichever name it is known, however, the jury’s power to acquit factually guilty defendants when it would be unjust to convict them—as in the famous 1734 libel prosecution of New York publisher John Peter Zenger—has itself been all but nullified here through the advent of American-style plea bargaining, which has become so nakedly coercive that 95 percent of criminal convictions are now obtained through guilty pleas rather than jury verdicts.
Smith was absolutely right about the indispensable role of juries in doing justice. Unfortunately, the rise of mass incarceration and the practical extinction of the jury trial on American soil are not remotely unrelated—as Adam Smith would certainly have predicted.