Smithian Narrative as an Antidote to Fundamentalism 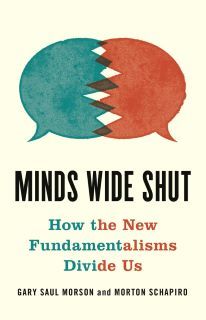 As Koenig shows, Adam Smith plays a key role in the argument of Gary Saul Morson and Morton Schapiro's new book, Minds Wide Shut: How the New Fundamentalisms Divide Us.
In their new book, Minds Wide Shut: How the New Fundamentalisms Divide Us, Northwestern University professors Gary Saul Morson and Morton Schapiro adeptly analyze the worrisome rise in fundamentalist, zero-sum, my-way-or-the-highway thinking across the disciplines of politics, economics, religion, and literary criticism. The marks of fundamentalism, they write, are inflexibility, certainty, and hubris, such that “[a]t the heart of any fundamentalism … is a disdain for learning from evidence. Truth is already known, given, and clear.”
In their sections on economics, they take aim at both market fundamentalists (who see market-based mechanisms as the answer to all social problems) and their similarly rigid anti-market opposites (who are never willing to countenance the efficiency and desirability of markets, no matter what). As an antidote to pro-market and anti-market fundamentalists, Morson and Schapiro turn to none other than Adam Smith, for two reasons.
First, “rather than imagine that human behavior can be modeled in terms of rational choices, Smith refers time and again to rationality as exceptional.” Market fundamentalists hope to distill human behavior down to a simple science: Mankind acts upon his rational self-interest. Full stop. Meanwhile, their socialist adversaries seek to overlook the reality of human self-interest and the power of incentives entirely.
As Smith demonstrates, both miss the more complex truth. Reason and self-interest are only one aspect—albeit a quite significant one—of our human nature. We also have a capacity for compassion, altruism, and sympathy, of which Smith writes so well in The Theory of Moral Sentiments. As Morson and Schapiro write: “Not only does Smith reject the idea that all human action is guided by perceived self-interest—an idea that in his time was represented by Hobbes—he argues quite the opposite, that a concern for others, as well as for ourselves, lies at the core of human nature.” In Smith’s eyes, human behavior cannot be reduced to a simplistic, single variable formula, for our desires, impulses, and motives are far too rich and complex.
Second, “Smith chooses … to devote a substantial portion” of his writings “to purely narrative explanations” for various economic and social phenomena. This is crucial, for as Morson and Schapiro note repeatedly throughout Minds Wide Shut, great stories have an awesome power to induce sympathy and understanding. They allow us to truly walk in another’s shoes, thereby gaining a greater appreciation for another’s point of view as well as the cultural mores and moral assumptions of those who’ve graced this earth at a different time and in a different place and with different opinions than we. In short, they help us grapple with complexity in all its forms—human, ethical, social, economic, and so much else. They write: “Our sense of others and our capacity for moral judgment would be so much richer if we could experience another person from within! And we can, through great novels.”
Smith understood the power of narrative to illustrate the complexity and richness of the human experience. As early as the opening pages of The Theory of Moral Sentiments, Smith begins to demonstrate why stories help trigger mutual understanding and sympathy:

“As we have no immediate experience of what other men feel, we can form no idea of the manner in which they are affected, but by conceiving what we ourselves should feel in the like situation. Though our brother is upon the rack, as long as we ourselves are at our ease, our senses will never inform us of what he suffers. They never did, and never can, carry us beyond our own person, and it is by the imagination only that we can form any conception of what are his sensations … By the imagination we place ourselves in his situation, we conceive ourselves enduring all the same torments, we enter as it were into his body, and become in some measure the same person with him, and thence form some idea of his sensations, and even feel something which, though weaker in degree, is not altogether unlike them” (TMS, 9).

Stories help kick our imaginations—the key mechanism by which we experience others’ experiences—into gear. They open the door to appreciating complexity and fostering sympathy. That Smith relies so heavily on stories in The Wealth of Nations and The Theory of Moral Sentiments is telling. He is comfortable with digging a bit deeper, sitting within gray areas, noodling over complexity. This is why Smith himself took aim at the figure of “the man of system,” or the intellectual fundamentalist, who:

“seems to imagine that he can arrange the different members of a great society with as much ease as the hand arranges the different pieces on a chessboard … to insist on establishing, and upon establishing all at once, and in spite of all opposition, everything which that idea may seem to require, must often be the highest degree of arrogance. It is to erect his own judgment into the supreme standard of right and wrong. It is to fancy himself the only wise and worthy man in the commonwealth, and that his fellow-citizens should accommodate themselves to him and not he to them” (TMS, 234).

The fundamentalist has no time to walk in another’s shoes. He has already accessed the Truth and has seen the light; he need not be bothered by the thoughts, feelings, opinions, and experiences of others unlike him.
Morson, Schapiro, and Smith all rightly scorn fundamentalist hubris and close-mindedness, and they call on us to always resist fundamentalist urges within our own heads and hearts, to keep an open mind to learning from the stories of others. We need not have all the answers in politics, economics, ethics, or whatever else; we simply must be willing to continually seek them out, and to revise our conclusions accordingly.

Thomas Koenig is a 1L student at Harvard Law School and the author of the “Tom’s Takes” newsletter on Substack. Twitter @thomaskoenig98.