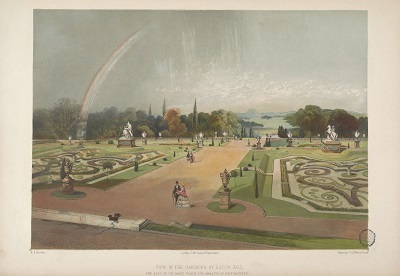 If we look carefully, we see that Smith praises both town and country living for promoting “independency.” He says that it arose much earlier for those in the city; but, it’s also one of the main attractions of country life. But where does he think we enjoy more or better freedom?
I recently ran across Sarah Skwire’s comment on Smith’s entry into the country-city debate about the best place to live. As is so often the case when Skwire and Adam Smith engage in intellectual commerce, it left me with a lot to think about.
Skwire emphasized Smith’s argument about the positive-sum interactions between town and country where “the gains of both are mutual and reciprocal, and the division of labour is in this, as in all other cases, advantageous to all the different persons employed in the various occupations into which it is subdivided.”
The division of labor is, of course, evident between cities and the countryside, but cities are unmatched in terms of fostering conditions for more and finer divisions that yield unprecedented specializations and efficiencies in production. Smith writes,

“A city might in this manner grow up to great wealth and splendor, while not only the country in its neighborhood, but all those to which it traded, were in poverty and wretchedness.” Cities are where commercial society is unleashed. People devise novel extensions of the division of labor, which even lead to the prosperity of the working classes. This is why Smith says city dwellers “arrived at liberty and independency much earlier than the occupiers of land in the country.”


Curiously, we also see Smith arguing that, other things being equal, most would choose the country life of, say, landed gentry over a life of trade or manufacture in the city. He cites the greater independence of country life and the degree to which a life of commerce is subject to uncertainty and processes that escape one’s direct control. He adds,

“The beauty of the country besides, the pleasures of a country life, the tranquillity of mind which it promises, and wherever the injustice of human laws does not disturb it, the independency which it really affords, have charms that more or less attract everybody; and as to cultivate the ground was the original destination of man, so in every stage of his existence he seems to retain a predilection for this primitive employment.”

Now there’s no accounting for taste and to each his own, etc.; but here are two points in response.
The first is quite small: I think Smith’s theological argument (about our “original destination”) in favor of country life is just mistaken. The cultural mandate Smith is referencing in Genesis 1:28 wasn’t simply to cultivate the ground, but to subdue the earth. God would have been disappointed with humanity if, even absent a fall, Eden stayed a mere garden. In particular, Revelation 21 and 22 present a description of the Holy City that suggests a completely overhauled Eden. So pace Smith (and Joni Mitchell), we don’t “got to get ourselves back to the garden;” rather, the picture of Eden restored is unequivocally a city.
The second point is a little more complicated. If we look carefully, we see that Smith praises both town and country living for promoting “independency.” He says that it arose much earlier for those in the city; but, it’s also one of the main attractions of country life. But where does he think we enjoy more or better freedom?
Smith may be recognizing a difference between the kind of independence people have in cities and in the countryside. In the country, you are self-reliant, master of your domain, free to roam and exercise your prerogative with relatively few impediments. You’re unconstrained by pesky rules and regulations that are nonetheless vital for crowded city life. There folks have to be much more careful about getting in the way of others and, more generally, how their actions directly affect and are intertwined with others in their close proximity. Yet, because of the divisions of labor that are possible, cities are (still underrated!) engines of well-being and economic opportunity, which delivers a different but significant kind of independence.
This might suggest that people choose between town and country based on the tradeoffs they make between economic opportunity and “real” freedom. For example, in exchange for greater economic opportunity, you might submit yourself to the restrictions of an apartment box in the sky, a nebby co-op board, post-9pm noise restrictions, smoking bans, etc., etc….
A recent talk by Ryan Muldoon has convinced me this isn’t quite right. Of course, there are tradeoffs, but they involve more than that between economic opportunity and freedom. The tradeoff is rather between different dimensions of freedom. Without denying the charms and attractions Smith highlights in country living, let’s not forget what’s on offer in our cities: a significantly broader range of choices! Diverse restaurants and untold many other services and recreations, groups of people who like the same peculiar things that you like, and those with similar backgrounds and interests and activities to pursue with them -- cities are (positive) freedom enhancing.
This isn’t the economic argument in favor of cities, but it isn’t entirely divorced from it, either. For the same reasons some hyper-niche medical specialization is more likely to be viable in the city, your quirky, hyper-niche activity group (or just one you might want to try) will be, too.
With all due consideration to Jean-Paul Sartre, Smith has the resources to show us that freedom is lots of other people!


Want to keep reading?
Sarah Skwire’s original article on the country-city debate that inspired the post
Loren Lomasky and Kyle Swan, “Wealth and Poverty in the Liberal Tradition”
Wealth of Nations Reading Guide for Book 3, Chapter 1 and Chapter 3 (quotation sources)

Related Links
Michael Munger, Division of Labor Part 3: The System of Exchange
Andrew Smith, On the Development of Communities

Living in the city is definitely more challenging and complex. I would say it carries higher rewards, but higher risks also. On the other hand, life in the countryside is more simple and predetermined which suites better someone, who like this routine