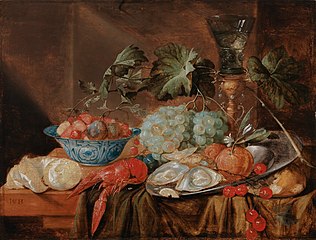 When we hear "shrub" today, many of us think of a plant. Yet as Wilmeth shows, the shrub is also a drink with a rich history, dating back to the days of Adam Smith.
We know what Adam Smith liked to drink. Claret, which we would call Bordeaux, beer, brandy, and even the occasional punch. But we haven’t talked about the venerable shrub, as much a cornerstone of pub life in the 18th century as soda fountain drinks are today.
Today, you may know the shrub as, in essence, drinking vinegar. But in the 17th and 18th centuries, it was a different drink entirely involving rum or brandy mixed with fruit and sugar and set aside for a few weeks. Once the macerated fruit added all of its flavors to the alcohol, the shrub could be mixed with water or drunk up on its own.
Heavily fruited brandy or rum was perfect for making in large batches and later, transporting via ship on long ocean voyages. Since citrus fruits were often mixed in, too, the sweet, fruity base was easy to add to a bit of tonic or fresh water as a refreshing drink for mid-day.
In the serialized story, Norman Hamilton, in an 1853 edition of Tait’s Edinburgh magazine, we find a lady in the 1760s waiting for the boat to Kirkaldy “much about the time that Dr. Adam Smith was composing his immortal tome at this very Kirkaldy now referred to.” Her friend orders for them both: “Bring here a bottle o’ your porter, Mrs. Buchanan, for me, and a gill o’ shrub for the leddy.”  (A gill in the UK is about five ounces.)
Shrubs were easy to make and the recipe was popular in the American colonies. Menus and bills for dinners and parties throughout the 1700s nearly always mention shrub along with beer, wine, liquor, and punch.
Over time, the shrub evolved. By the 1850s, shrubs were made mainly with rum and sugar, and not very much later, appear made with vinegar and sugar. The vinegar was likely made from spoiled wine, so it’s not too far a leap to think of preserving raspberries with sugar and red-wine vinegar for a “raspberry drinking vinegar” or shrub. By the early 20th century, the alcohol had been removed entirely from most recipes.
Today, you don’t have to soak fruit for weeks in brandy to make your own shrub at home. You can often find vinegar-based, non-alcoholic shrubs – thick, syrupy, tangy, and sweet -- at farmer’s markets and natural food stores made with a wide variety of fruits and even vegetables.
However, a traditional old-fashioned shrub made with brand or rum is harder to find. To create a shrub similar to what Smith would have enjoyed, we look back to Elizabeth Cleland’s 1755 New and Easy Method of Cookery.  She calls for 5 gallons of rum which might be too much for us today. But the lemon juice, orange juice, and sugar sound delicious.  Even better, don’t raspberries sound good too?
These recipes are scaled down for today’s kitchen – and would be delicious as part of a cocktail or served over ice.  As you get more adventurous you can try different sugars and liquors or add herbs and spices for flavor.  Here are two recipes for shrub from Smith’s time to get you started.