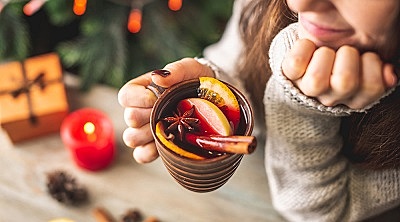 Smith would have enjoyed his favorite claret, what we would call Bordeaux today, as well as, perhaps, a Christmas punch.
‘Tis the season for holiday celebrations, and none would be complete without imagining how Adam Smith might have spent a Scottish Christmas.


The holiday in 18th Century Scotland generally began with Christmas Day and ran through Hogmanay – or the New Year – and involved at least a week of celebrations. Some families celebrated the full twelve days of Christmas ending on January 6, the Epiphany. Most get-togethers were social celebrations as many Protestant churches at the time, including the Presbyterian Church of Scotland, celebrated Christmas in a rather quiet fashion.


During the season families and friends gathered, often for a week or two at a time, and enjoyed lavish dinners, Christmas puddings, and many glasses of punch. Families fêted servants on Boxing Day, and the rest of the week was often full of hunting parties and visits with other households.


Christmas was a perfect time to visit family and friends and often required travel to stay for long periods of time. Country houses and estates were perfect for hosting a large number of people even when weather made travel difficult. Horses and carriages often couldn’t navigate mud or heavy snow. According to The Life of David Hume, This happened to Hume one year when he was on his way to visit the Comtesse de Boufflers at L’Isle Adam for Christmas in 1775. He was forced to return to Paris due to heavy snow. Even though many families celebrated Christmas as a religious holiday, a holiday visit would have been a social occasion that even the atheist Hume couldn’t resist.


We know very little about Smith and the holidays, although we do know that he was with his mother at Kirkaldy for Christmas in 1776 before departing for London in January 1777. By all accounts, their home in Kirkaldy was a modest one, but it was made warm and loving by his mother and his cousin, Janet Douglas. They would have decorated with traditional garlands of fresh greens and used candles for festive lights. Churches would have been more elaborately dressed with Christmas trees and garlands dotted with holly.


Music was a large part of Christmas during the time with families and friends alike singing Christmas carols and hymns throughout the holiday. Family would exchange gifts, often handmade or purchased during travels. (Who could imagine what to buy for Adam Smith? New stockings or a colorful necktie?)


But even with music and festive decorations, the real hallmark of the Christmas season was the food: Puddings, plum cakes, roasted turkey and goose, vegetables, preserved fruits, roasted lamb, pork, and even more treats for adults and children alike. And to drink? Smith would have enjoyed his favorite claret, what we would call Bordeaux today, as well as, perhaps, a Christmas punch.


Writer Edward Topham, in his Letters from Edinburgh 1774-1775, tells us that brandy and rum punches were all the rage in town, served from large bowls in homes and in the Oyster Cellars frequented by gentlemen and ladies. He recounts one establishment where “…as the table was cleared, and glasses introduced. The ladies were now asked whether they would choose brandy or rum punch? I thought this question an odd one, but I was soon informed by the gentleman who sat next to me that no wine was sold here; but that punch was quite 'the thing.' The ladies, who always love what is best, fixed upon brandy punch, and a large bowl was immediately introduced.”


At least one biography of Adam Smith tells us he “enjoyed a tankard of claret, followed by whist and punch” while spending evenings with friends. (One friend said he was a “bad partner” since he’d often give up the hand of cards when an idea struck him.)  (Hirst, Adam Smith, 96)


Cocktail historians tell us punch at this time had, classically, 5 ingredients: A spirit (rum or brandy), fruit, sugar, spices, and a base – either wine, fruit juice, tea, or milk. Hannah Woolley, the 17th Century English cookbook author, gives us the following recipe in The Queen-like Closet:  “To make Punch. Take one Quart of Claret Wine, half a Pint of Brandy, and a little Nutmeg grated, a little Sugar, and the juice of a Limon, and so drink it.”  We suspect you might like something a bit more updated and scaled down. No punchbowl required.


Mix the first five ingredients in a large pitcher (or punch bowl).  Serve in tall glasses over ice. Garnish with the sugar cube, cinnamon stick, rosemary and orange slices.  Top up with club soda.