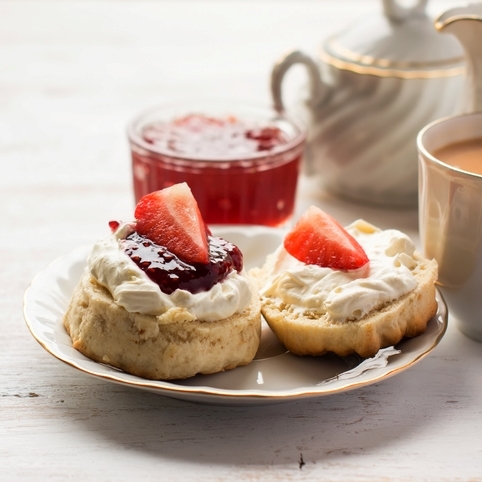 Tea in Scotland during Smith’s time was a critical component of breakfast (along with coffee, which was more common at home in Scotland than in England). A classic breakfast during Smith’s time was tea and toast – or rolls. (And for Smith, sometimes even strawberries) It was also an important social ritual during the day.
The second half of the 18th century was one of the most influential times in history, especially when it came to tea. This isn’t to confuse the meal of “tea” with the drink “tea” which had been popular in Scotland and England since the 17th century. By the early 1700s. The rich, dark brew was a staple in most households.


Tea drinking in England became truly popular in the mid-1600 when it was adopted from the Dutch. Legend has it that tea was introduced into Scotland in the 1680s by the Duchess of York. As the Dutch fell out of favor, it was important the English secured their own supply which they did via the English East India Company. Physicians and philosophers alike extolled the drink’s health benefits, and, in some households, it was so precious that the lady of the house kept a special locked “tea caddy” to keep servants from helping themselves.  It’s also said that the expense of tea is what gave some English the taste for the drink brewed weakly and served with milk and sugar.


As tea became more available and affordable, the Industrial Revolution created a new working class which rose early, relying on tea for fortification. And while the leisure class rose late, they ate dinner later, too. Throughout the 1700s, “supper grew grander and was nudged later and later into the evening hours,” writes British historian Lucy Worsley in her book, If Walls Could Talk: An Intimate History of the Home.  While it wasn’t until the early 19th century that afternoon tea became a true meal, tea served with a snack like biscuits or small sandwiches, was common.


Elizabeth Foyster, in her History of Everyday Life in Scotland 1600-1800(co-edited with Christopher Whatley), notes that by the early-1700s, tea was a popular way to socialize, especially for the upwardly mobile. You could invite your neighbors over to see your new drawing room or the latest luxury items. And with the British ceramics boom, you would want to show off your full set of tea pot, cups, saucers, and matching plates.


However, regardless of social rank, tea was a luxury nearly anyone could afford. “By the 1790s, ministers … highlighted the new role of tea in the changing budgets and social practices of ordinary Scots.“


It’s interesting that Smith considered tea a luxury for the working classes, unlike malt, hops, beer and ale, which he classified as a necessity in his discussion on taxes in Wealth of Nations.

By 1767 and 1768, the British passed the Townshend Acts, one of which placed duties on luxury goods such as tea (along with glass, lead, paint pigments, and paper) in British colonies. The idea was that the British would reap additional taxes from colonial outposts, but the result was fury at the government and a drastic increase in smuggling. All but one of the Acts were repealed in 1770. The one that remained in place? It was the one that required a duty on tea. The rest is, as they say, history.


Tea had established its place in English and Scottish households.  And a sign of that change in the 1700s?  As Mackintosh of Borlum would write in 1729 and Henry Grey Graham would include in his book The Social Life of Scotland in the Eighteenth Century:

‘When I came to my friend’s house of a morning, I used to be asked if I had my morning draught yet? I am now asked if I have had my tea? And in lieu of the big quaigh with strong ale and toast, and after a dram of good, wholesome Scots spirits, there is now a tea-kettle put to the fire, the tea-table and silver and china equipage brought In, and marmalade and cream.”

We can’t get close to the disappointment Mackintosh of Borlum must have felt to have his wee dram replaced by a tea tray, but we can give you a recipe for a scone or breakfast biscuit that might have been found served along with tea, marmalade and cream.


1. Preheat the oven to 350F. Line a large baking sheet with parchment paper.


2. In a large mixing bowl, combine the butter, sugar, and cream.


3. Add the flour, baking powder, baking soda, and salt and mix to combine. It should form a sturdy dough.


4. Add the fruit to combine.  Don’t knead or overmix the dough.


5. Turn onto a floured surface. Add more flour is the dough is too sticky. Press or roll the dough to be ¾ inches thick. Then cut with a floured cutter. Place the cut rounds on the parchment lined baking sheet. Reroll and repeat with the remaining dough. (Will make 8-12 depending on the size of your cutter.)


Want to Read More?
Previous posts in our "What Adam Smith Ate" series
Can drinking tea turn you into a ‘harlot’? – The History of Love (wordpress.com)
WealthofTweets on Taxes in the Wealth of Nations (on Twitter) and here (on ASW)