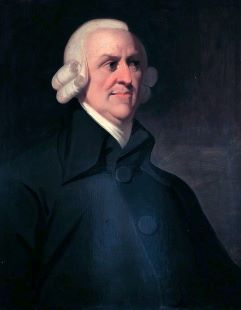 Did Adam Smith know what it was like to be in love? Here's a law professor's primer on the evidence.
Who were Adam Smith’s lost loves? The father of modern economics made many landmark contributions to the world of ideas--the invisible hand, the division of labor, and the impartial spectator, just to name a few--but his love life is still an enigma.
Previous generations of Smith scholars have taken different stances when writing about Smith’s love life. Most simply avoid the subject altogether. Some, however, have entertained the possibility of love affairs, but they do so reluctantly, either relegating their romantic speculations to a footnote or merely alluding in passing to the possibility of Smith falling in love during his days as a “travelling tutor” in France (1764-66).
Since one of my areas of expertise is the law of evidence, I suggest we take a different approach. Let’s make a witness list, and let’s take a look at the available evidence.
Our first witness is Dugald Stewart. Professor Stewart is a credible witness: he not only held the chair of moral philosophy at the University of Edinburgh from 1785 until 1820; he also knew Adam Smith personally and wrote the first account of Smith’s life and work. Among other things, Stewart’s biography of Smith concludes with the following footnote:

“In the early part of Mr Smith’s life it is well known to his friends, that he was for several years attached to a young lady of great beauty and accomplishment. How far his addresses were favourably received, or what the circumstances were which prevented their union, I have not been able to learn; but I believe it is pretty certain that, after this disappointment, he laid aside all thoughts of marriage. The lady to whom I allude died also unmarried. She survived Mr Smith for a considerable number of years, and was alive long after the publication of the first edition of this Memoir. I had the pleasure of seeing her when she was turned of eighty, and when she still retained evident traces of her former beauty. The powers of her understanding and the gaiety of her temper seemed to have suffered nothing from the hand of time.”

Our next witness is Henry Mackenzie, a popular Scottish novelist who, along with Dugald Stewart, co-founded the prestigious Royal Society of Edinburg. Mr. Mackenzie will testify that “Adam Smith [was] seriously in love with Miss Campbell of ________ (the name is so numerous that to use it cannot be thought personal), a woman of as different dispositions and habits from him as possible.” Is this “Miss Campbell” the same lady that Professor Stewart is referring to in his famous footnote?
Our third witness is Dr. James Currie, a distinguished medical doctor from the town of Liverpool. His testimony comes in a letter dated July 14, 1791--a letter which is addressed to Professor Stewart, by the way. Although Doctor Currie’s testimony consists of hearsay, he provides possible evidence of a second(!) love affair:

“Dr. Smith, it seems, while at Abbeville [in northwest France], was deeply in love with an English lady there. What seems more singular, a French Marquise, a woman of talents and esprit, was smitten, or thought herself smitten, with the Doctor, and made violent attempts to obtain his friendship. She was just come from Paris, … [and she] was determined to obtain his friendship; but after various attempts was obliged to give the matter up…. He [Smith] could not endure this French woman, and was, besides, dying for another.”

Our fourth witness is Madame Marie-Jeanne Riccoboni, an illustrious femme de lettres and one of the best-selling novelists in 18th-Century France and, before that, a highly accomplished actress in the Théâtre-Italien, located in the Hôtel de Bourgogne of Paris. Madame Riccoboni got to know Adam Smith personally during Smith’s year in Paris (1766), and in a letter addressed to fellow actor and playwright David Garrick, a letter dated October 1766, she makes the following confession:

“I am very pleased with myself, my dear Garrick, to offer you that which I miss very sharply: the pleasure of Mr. Smith’s company. I am like a foolish young girl who listens to her lover without ever thinking of loss, which always accompanies pleasure. Scold me, beat me, kill me! But I adore Mr. Smith, I adore him greatly. I wish the devil would take all our philosophes, as long as he returns Mr. Smith to me.”

I have, however, saved the best piece of evidence for last--a possible smoking arrow: an intimate letter authored by one Abbé Colbert, a fellow Scotsman and Adam Smith’s chief guide and friend during Smith’s extended 18-month sojourn in Toulouse (1764-65). Smith and Colbert travelled together throughout the South of France and became close friends during this time. This letter, which is dated September 18, 1766, is addressed to Smith himself and contains the following admission:

“And you, Adam Smith, Glasgow philosopher, high-broad Ladies’ hero and idol, what are you doing my dear friend? How do you govern the Duchess of Anville and Madame de Boufflers, where your heart is always in love with Madame Nicol and with the attractions as apparent as hidden of this lady of Fife that you loved.”

These five pieces of amorous evidence all point in the same direction: it is more likely than not (the standard of evidence used to judge the truth of facts in civil cases) that Adam Smith knew what it was like to feel passion, and to fall in love.