Reading the Wealth of Nations: Book I 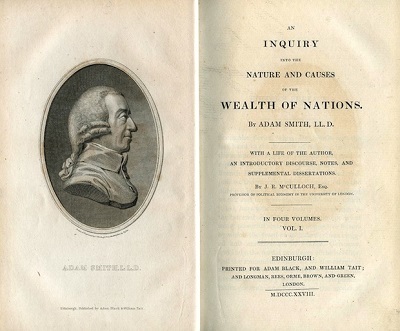 None of us can know what Smith would have thought of UBI, government regulations, or trade with China, but it sure is fun to speculate.
This fall, the Institute for Liberal Studies is hosting an online reading group for the Smith’s most famous book, An Inquiry into the Natures and Causes of the Wealth of Nations. Once a week, for eight weeks, we meet online to help each other better understand this important book with help from discussion leaders Amy Willis, Andrew Humphries, and Janet Bufton.


Our discussion of book one focused on Smith’s ideas about labour. Although many people today will picture Henry Ford’s assembly line when they think of the division of labour, Smith’s pin factory is a reminder that specialization came about long before the Model T.


Some of our participants wondered whether it was possible to have too much specialization of labour. Smith himself worried about the effects that monotonous labour would have on the character of an individual. However, looking at the productivity of labour, it seems more division and specialization will continue to pay dividends.  (Increased specialization can lead to more risk, as well as more productivity though, one group member reported waiting months for a new fridge, as a result of the shortage of microchips.)


Our discussion about labour flowed into a conversation about human flourishing. Smith’s book is, after all, a study into the wealth of nations. His hostility to mercantilism and the idea that a nation’s wealth was measured by the amount of gold it stockpiled is clear. What does it mean for a nation to flourish? Can it thrive while its people languish?


Smith, it was pointed out, was no anarchist. So what degree of government regulation, if any, would he endorse in the pursuit of greater flourishing? Smith is, quite rightly I think, skeptical of the ability of the state to properly regulate wages. As Willis pointed out, Smith is loved by scholars from many disciplines, and also claimed by many of them. He is most widely known today as an economist, yet described himself as a moral philosopher. The case could be made that the modern equivalent of his work would be comparative political science, or sociology, or anthropology.


Our group also discussed Smith’s phrase, “the liberal return to labour”. What does he mean by this? One member suggested he is comparing the higher productivity of free labour, compared to that of forced or indentured labour. In Smith’s time, the idea that a person could choose how, where, and when they would work might have seemed novel and strange to some.


Near the end of our conversation we turned our attention the contemporary debates around a universal basic income (UBI). Would Smith have endorsed such a plan, we wondered? Smith saw the problems with government interventions in markets, and perhaps this would have soured him on the idea. On the other hand, a UBI is (as economist Michael Munger has argued) perhaps the least interventionist way of addressing issues resulting from the displacement of workers by technology. Some commenters worry about the effects of a UBI on the character and work ethic of those who receive it, a concern that the moral philosopher Smith would have certainly acknowledge. But would he have shared it?


None of us can really know what Adam Smith would think if were alive today. Perhaps that is part of the enduring appeal of a book like the Wealth of Nations. Smith raises a wealth of questions, and there is an infinite number of possible answers. None of us can know what Smith would have thought of UBI, government regulations, or trade with China, but it sure is fun to speculate.

As for the UBI, I would always opt for Milton Friedman''s negative tax income, as a non-interventionist welfare measure.