What Would Adam Smith Think? The Causes and Consequences of the Great Resignation 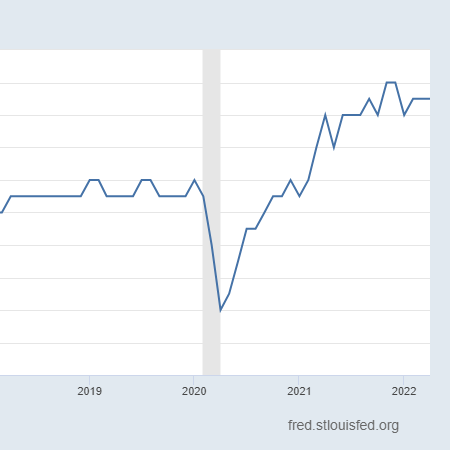 The pandemic illuminated many "insufficient encouragements."  Many workers realized their skill sets are better leverage than before.  People choosing to quit are acting in their self-interest and that’s a good thing.
The Great Resignation of the Covid pandemic should be called the Great Quit because that’s what workers did–they quit.  This was and is about workers who had enough.  Enough of low wages, long hours, insufficient benefits, bad work/life balance, and, importantly, lack of job security. Individuals, in very large numbers, re-evaluated incentives, in particular, their incentives to work, spend, and save by making bold, new choices.
The economic circumstances of the Great Resignation present a real-life scenario to teach how changes in personal incentives lead to changes in a nation’s economy. What are some of the overarching effects of the Great Resignation?  We will focus on two: unhappy workers produce less and increased savings will eventually benefit the nation. In this part, we’ll focus on the first. In a future post, we’ll focus on the second.

Adam Smith postulated in 1776 in The Wealth of Nations that, “Our ancestors were idle for want of a sufficient encouragement to industry.” In other words, incentives benefit employers and employees. This is still true today in 2022. Employers makes profits and employees are better off than when not working.  The pandemic illuminated many insufficient encouragements.  Many workers realized their skill sets are better leverage than before.  People choosing to quit are acting in their self-interest and that’s a good thing.
The Bureau of Labor Statistics (BLS) keeps data on quits rates to distinguish worker movement from employees who are fired or laid off. In 2019, before large effects of the pandemic were in the US, quit rates were about 2.3 or 2.4 percent. In March of 2020, it dips to 2 percent, April is the low of 1.6 percent, then it starts rising and, within a year, surpasses the previous averages by a lot.
Chart 1. Total Nonfarm Quits Rates, Seasonally Adjusted

Between 2019 and 2021, the total annual quits rate increased from 28% to 32.7% - an almost 5-point difference! And the early data from this year (January-April) looks like the quits rates are staying high. The quits rate in February of 2020 (pre-major pandemic effects) was 2.3 percent, about 3.4 million people in a month.  In the BLS preliminary data from April it’s 2.9 percent. That’s about 4.4 million people in a month. From October 2021, when the quits rate returned to the pre-pandemic level of 2.3 percent, until last month, there have been about 94,128,000 quits. That is a lot of labor market shuffling! While there is no easy way to know where quitting workers went (a worker who quits to another job and a worker who quits and leaves the labor market are counted the same in this data set), we do know some things about which industries are experiencing lot of quits and if you’ve been to a fast-food restaurant and waited twice as long for an order with twice as many mistakes as you used to get, you won’t be surprised.

BLS Establishment Survey data reveal, “Employment in leisure and hospitality is down by 1.4 million, or 8.5 percent, since February 2020” which is the highest percentage of decreased employment among major industries, such as manufacturing and healthcare.
Chart 2. Quits levels for Leisure and Hospitality, Manufacturing, and Education and Health Services

Source: FRED Graph | FRED | St. Louis Fed (stlouisfed.org)
You can see the chart (and play with the data yourself!) here. Workers in the leisure and hospitality industry, one of the lowest-paying sectors are leaving. Workers leave for lots of reasons in addition to seeking better pay: avoiding difficult customers, wanting safer working conditions, or more flexibility. And, as you can see in the next chart, hiring level are higher than the past in all three of the industries we just looked at.
Chart 3: Job Openings for Leisure and Hospitality, Manufacturing, and Education and Health Services

Source: FRED Graph | FRED | St. Louis Fed (stlouisfed.org)
In addition to quits and job openings, we can also look at the increase in self-employment. Below is a chart that shows a large increase over pre-recession self-employment. In February of 2020 there were 9.6 million, the preliminary April data suggest were now closer to 9.9 million.
Chart 4: All Industries Self-Employed, Unincorporated

Source: Employment Level - All Industries Self-Employed, Unincorporated | FRED | St. Louis Fed (stlouisfed.org)
In March 2022, a Pew Research Center survey found that among those who quit a job at any point in 2021, the below percentage show how many said the following was a reason:

“A majority of those who quit a job in 2021 and are not retired say they are now employed, either full-time (55%) or part-time (23%). Of those, 61% say it was at least somewhat easy for them to find their current job, with 33% saying it was very easy.” All who quit a job found the following five areas had improved, increased, or were now easier: earning more, opportunity for advancement, work/life balance, flexibility with work hours, and combinations of benefits, time off, and insurance.
Reasons for this shift included the opportunity to be one’s own boss, working at a job one is passionate about, and wanting more flexibility. Once again, Adam Smith has relevant wisdom:


Eventually, these new entrepreneurs will purchase investment goods which creates more income and opportunity for spending once again.
In our next post, we’ll discuss how savings catalyzes investment. Coming soon!
Want to read more?
By the authors
News stories that inspired the authors
On related topics
For Teachers


About the authors: Caroline Parrish (parrish.caroline at yahoo,com) and Karen Yancy (noopy123 at charter.net) met at a Liberty Fund / Foundation for Teaching Economics colloquium on International Trade.  While waiting for their respective flights at Reagan Airport, Caroline and Karen discovered they both like F.A. Hayek and Adam Smith and a vigorous 3-hour discussion ensued about how to teach these essential philosophies to students.  Karen, a traditional campus teacher, and Caroline, a full-time teacher via virtual learning academy, both teach AP Macroeconomics and on-level Economics.  They have been published several times, writing about varied topics such as subsidy sunsets, bartering, and Veblen goods.  Karen and Caroline enjoy frequent collaboration to find new ways to share the wealth of good information in Economics.