Would Adam Smith Have Supported the Jones Act? 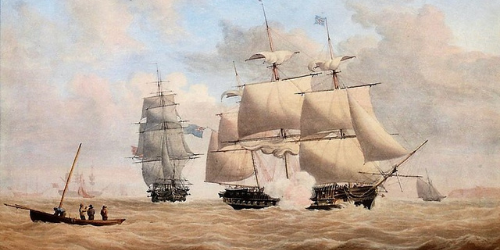 
Smith was concerned that free commerce could work too well in making the citizens of a nation “effeminate and dastardly,” and thus lose their martial spirit (Lectures on Jurisprudence, II, xvii).  To that end, Smith did have a martial streak in his writings, and tended to support regulations that could counter some of the more sweetening aspects of doux commerce (for more on Smith’s relationship to doux commerce, see “Free Trade Does Not Foster Peace,” by Erwin van de Haar [Economic Affairs, June 2020 40(2)] and “Do Not Take Peace for Granted: Adam Smith’s Warning on the Relation Between Commerce and War,” by Maria Pia Paganelli & Reinhard Schumacher [Cambridge Journal of Economics, May 2019 43(3)]


As the national defense of Great Britain “depends very much upon the number of its sailors and shipping,” Smith initially heaps praise on the acts of navigation.  The Acts were two Acts of Parliament passed under Charles I and Charles II that strictly limited, or outright forbid, foreign shipping in Great Britain and between her colonies.  Smith calls these acts “perhaps the wisest of all the commercial regulations of England.” As an aside, given how critical Smith is of commercial regulations in general, this seems like damning with faint praise.  The Jones Act was inspired by the Acts of Navigation.


Purzycki’s entire case for Smith supporting the Jones Act relies on this one quote.  This is odd given that Smith discusses the Acts in another context in the Wealth of Nations: how the Acts actually performed versus the theoretical justification for them.  Looking at the practical effects, Smith’s praise doesn’t seem as absolute.  Later in the Wealth of Nations (IV.vii.c), Smith argues that the Acts were ineffective in strengthening British naval power as Britain was already a major naval power.  Smith argues that the Acts may have actually weakened British industry and “rendered [the whole of her industry and commerce] less secure; the whole state of her body politik less healthful than it otherwise would have been.”  The Acts may have even led to the American Revolution, which Smith saw as further undermining the British political body.


Smith was not a theoretical economist.  Mere theory, no matter how well conceived, was insufficient for him to justify some act.  Practical outcomes mattered, too.  Indeed, his discussion on mercantilism largely attacks the system on practical grounds, although he also eviscerates the underlying theory as well (see, for example, “Adam Smith’s Digression on Silver: The Centerpiece of the Wealth of Nations” by Maria Pia Paganelli [Cambridge Journal of Economics, April 2022].  Thus, to argue whether or not Smith would have supported the Jones Act, we need to look at how successful the Act has been in its stated goal of protecting American naval capacity.


How effective has the Jones Act been?  According to Purzycki, not very.  He cites Rear Admiral Mark Buzby’s 2019 analysis that the Ready Reserve Force’s ability to sail is only about 40% of vessels.  Even that estimation may be optimistic.  Colin Grabow, Cato Institute scholar and co-author with Inu Manak of The Case Against the Jones Act, reports that the US has had to rely heavily on foreign-flagged vessels (including Soviet ships!) in major military operations since the Act.  Failure to waive the Jones Act slowed the recovery of Puerto Rico after Hurricane Maria struck it in 2018).  Due to the Act, the US imported large amounts of LNG from Russia rather than using domestic supplies.  If Russia is a geopolitical foe, then the Jones Act is weakening national security.


The Jones Act has been ineffective in protecting American shipping and, in turn, has resulted in increased prices and suffering of American citizens. Would Smith support that? Smith was indeed a nuanced thinker, as Purzycki states.  Which is why we have to treat him with nuance.