What Adam Smith Ate: Voltaire and the Vegetarian Salad 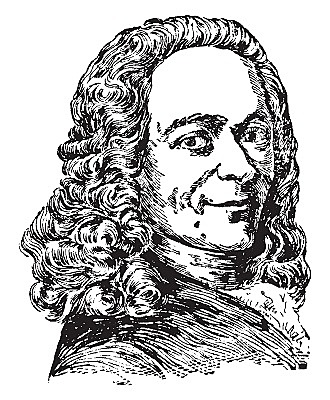 “Consumption is the sole end and purpose of all production”
― Adam Smith, An Inquiry into the Nature and Causes of the Wealth of Nations

In the fall of 1765, Adam Smith and his pupil, Henry Scott, Duke of Buccleuch, left Toulouse and ventured east to Geneva. The Enlightenment was in full swing, and Geneva was a center of government, wealth, and culture. The birthplace of Rousseau, the city fostered scholars in political science, philosophy, and economics.


Geneva was also the adopted home of philosopher and writer François-Marie Arouet, more commonly known by his nom de plume -- Voltaire. By now, the famed playwright was 70 years old. Smith’s biographer Francis Wrigley Hirst describes him as “a literary potentate of Europe.” Pilgrims traveled to his estate at Ferney from all over Europe to pay their respects.


Ferney, located just over the border in France, 10 miles from central Geneva, gave Voltaire easy access to the Swiss city while still living in remotest France. The estate became an essential visit for the enlightened elite, and Smith was no exception. Hirst notes Smith visited Voltaire at Ferney five or six times during their two-month stay in the area, striking up a lasting friendship.


At Ferney (today, called Ferney-Voltaire), one can imagine the constant comings-and-goings of writers, thinkers, and French high society coming together at dinners with the great man himself. Voltaire was known to engage in scandalous conversation at his dinner table – something that would keep any dinner party entertained.


In Evelyn Beatrice Hall’s Life of Voltaire (1908), Englishman Martin Sherlock gives us an account of a dinner about the time of Smith’s visit. “The dinner consisted of two courses and was eaten off silver plates with the host’s coat of arms on them; while at the dessert the spoons, forks, and blades of the knives were of silver-gilt.” He adds that no stranger served was ever allowed to “officiate” at meals which were served by five servants who waited on the table, three in livery.


French writer Caroline-Stéphanie-Félicité, Madame de Genlis, tells us of a dinner in 1766. “During dinner, M. de Voltaire was by no means agreeable; he appeared to be continually angry with his servants, calling to them so loudly that I started. I had been told beforehand of this habit, so singular before strangers, but it was evident that it was merely a habit, for the servants neither appeared surprised nor troubled.”


Even so, Voltaire was known as a gracious estate owner and generous host. Described as “Good to all about him” by the Prince de Ligne, Voltaire’s style of entertaining was simple and comfortable (and his home’s grounds, magnificent.) We can imagine this style would have appealed greatly to Smith who was known to be a bit uncomfortable with the high court entertainments his friend David Hume enjoyed in Paris. Even better for Smith, by this time, Voltaire was able to converse fluently in English. But was Voltaire a vegetarian as many claim?  Would Adam Smith have been served vegetarian meals during his visits to Ferney?


Voltaire had introduced Hinduism and Indophilia into mainstream culture and was working on The Princess of Babylon (1768), a mythological fantasy in which animals could no longer speak to humans because “men have accustomed themselves to eat us.”  Seized upon by eager vegans, many advocates today cite Voltaire’s advocacy of animal rights as evidence he didn’t eat meat. Some even go so far as to posit that Smith followed the practice, too, since he advocated strongly for the healthfulness of a potato-based diet in The Wealth of Nations.


But while Voltaire may have liked the idea of vegetarianism, scholars generally agree that it is unlikely he followed the practice for long – if at all.  Even so, as Tristam Stewart notes in The Bloodless Revolution, both Voltaire and Rousseau “added new spice to the fashionable appetite for simple vegetarian food.”


While we may never know for sure, we can imagine the decidedly French-influenced feast Voltaire writes about in The Princess of Babylon--a delectable feast “of rice, of sago, of semolina, of vermicelli, of macaroni, of omelets, of eggs in milk, of cream-cheese, of pastries of every kind, of vegetables, of fruits.”


You might not be ready to try an all-plant-based diet either, but here’s a recipe suitable for a dinner that even Voltaire would have enjoyed. Belgium endive (chicory, in Europe) would have originally been gathered by foragers in France. By the 1750s, growers knew how to “force” the leaves to grow into a tight bud. It would have been served raw or wilted and lightly dressed depending on whether it was served before or after the main course.  We can imagine that at Ferney, the kitchens would have had fresh goat cheese, cream cheese, and in the fall – when Smith was visiting - pears!