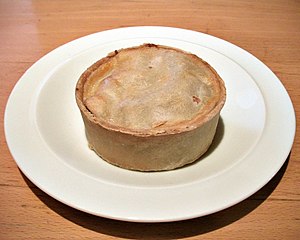 Distinctive because of their straight-sided crust, pastry topper, and pate-like filling of spiced beef or lamb, these meat pies are still popular in Scotland as take-along snacks.

While busy lecturing, writing, and debating ideas in Glasgow, Smith was still an active member in several of Edinburgh’s literary circles including The Select Society, a group for intellectual elites formed several years earlier. Smith often made the 44-mile trip between the two cities – as much as 13 hours by carriage! (EG West, 137)

The year 1759 marked publication of Adam Smith’s Theory of Moral Sentiments and the beginning of his work on Lectures on Rhetoric. It’s easy to imagine the 36-year-old scholar making the trip to Edinburgh. It was only 44 miles between the two cities.
While today we might make the trip in under an hour, it was a different story when it came to the carriage ride in the 18th century. In movies, passengers ride comfortably in luxurious carriages pulled by fast teams of horses, but the reality was less glamorous. Imagine endless hours of jostling shoulder-to-shoulder with strangers, bracing yourself as the carriage careened through ruts in the road, bumping and rumbling along.
A typical coach was a four-wheeled box with small windows on the sides, pulled by four horses. Historian Daniel Pool notes that coach springs weren’t invented and in use until the “latter part of the 1700s” making for a more comfortable ride, so the carriage box would have been fastened directly to a frame that  rocked along as the horses ran.
Smith might have been willing to pay for a hired coach – a post-chaise – but it seems more likely he took advantage of a regular coach traveling between the two cities. These coaches could travel as fast as 4-6 miles an hour, changing horses frequently to maintain their speed.
Roads were often muddy or wet and filled with deep ruts and holes. Carriages kept their metal-rimmed wheels in the ruts, but heavy rain or a balky horse could mean the carriage might lurch its way to the side of the road. With little warning, passengers who were already sitting shoulder to shoulder could be heaved  into each other’s laps.  Injured horses, broken wheels, and carriage accidents were not uncommon.

A public coach between cities would have carried at least 6 passengers inside and more on top. When it was cold, men and women wore heavy clothes and coats for the ride and carried few bags or personal items. (Private coaches might have furs for passengers to keep warm.) And if your coach companions hadn’t showered in a few days or washed their clothes, the bumpy ride wouldn’t be the only bit of unpleasantness.
To travel between Glasgow and Edinburgh, Smith would have endured a 10-12 hour carriage trip -- a full day of travel, encountering traffic along the way in the outskirts of each city and busy market town.  The chemist Charles Hatchett was an extensive traveler and knew a thing or two about coaches, as his father was a well-known London coachmaker. Hatchett documented many of his trips, including one through England in 1796, giving us a description of traveling via public coach.

At one in the morning set out in the Exeter Coach or Spanish Mail for Exeter. Rainy morning... In the coach was a young Gunner going to Plymouth pretty much in liquor, a Mrs. Dawson wife of Sir E Pelew’s gunner going to join her husband at Plymouth, a young woman going also to Plymouth, and two children of Mrs. Dawson, one 9 and the other 6 years old. The coach was therefore much crowded so that was exceedingly crippled; and on account of the heat, pressure, and stench from the sailor of gin and tobacco, … As it rained the females wanted to have the glasses [windows] up, but were stoutly opposed by Mr. S. who carried at length his point, being greatly agitated. He swore in Italian, German, French and broken English. The children were sometimes upon our knees and at other times kicked my shins.

For a long day, Adam Smith would have packed a meal and there were a number of Scottish foods he might have brought along. Among the stand-bys would have been Scotch pie, a portable meat pie, easy to take along when traveling. Most likely Smith’s cook or housekeeper would have tucked a few of these savory pastry pies into an oiled cloth or paper wrapper.
These meat pies are still popular in Scotland as take-along snacks. They are distinctive because of their straight-sided crust, pastry topper, and pate-like filling of spiced beef or lamb. I’ve modernized this one but the result should still be a pie that’s more like a mini-meatloaf in a crust. American cooks may not have small, deep pie tins, so you’ll need 8 ramekins or pie tins about 3 ¼ inches across. You can also use jumbo muffin tins (what I call “coffee-shop size”.)
Scottish Meat Pies
3 sheets of ready-made pie crust or your favorite pastry recipe
1 lb ground beef, lamb or a mix of both
½ cup onion, finely chopped
2 cloves garlic
1 tbsp Worcestershire sauce or steak sauce (like HP)
½ tsp ground cloves
½ tsp ground allspice
3 tbsp flour
1 cup beef broth
Salt and black pepper to taste
1 egg