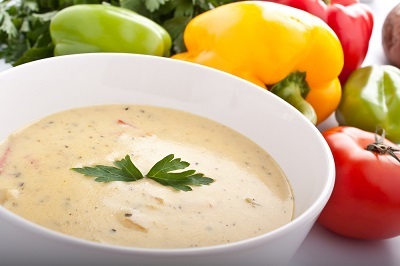 Learn how to make a version of the soup that some say David Hume helped to re-popularize in late-eighteenth-century Scotland.
English writer Edward Topham was not the first to note the connection between Scotland and France, famously observing that there were “a thousand instances” of conviviality between the two countries. The popularity of French cuisine through Scotland during the 18th century was no exception.
By late 1766, both Adam Smith and his good friend David Hume had returned from Paris. Hume had moved home when his job as Secretary at the British Embassy ended. Smith returned after the untimely death of Hew Scott, the Duke de Buccleuch’s younger brother.
The Honorable Hew Campbell Scott contracted a fever and died in Paris in October and accounts vary about whether there was an accident that preceded the short illness. What is clear, though, is that he was not “assassinated on the streets of Paris” as was misreported later in Scottish accounts.
Young Hew passed on October 19, 1766, and by November 1, Smith and his party had arrived on the shores of Dover. By May 1767, Smith was back in Kirkcaldy living “in great tranquility, and almost in complete retirement,” (as he later described it in a letter to Danish trade commissioner Andreas Holt.)
However, Smith was far from retired and was using the time to dive into his greatest work. His good friend, David Hume, on the other hand, seemed ready for a quiet life and had returned to his home in James’ Court, Edinburgh. In a letter to poet Sir Gilbert Elliot from October 1769, he writes that he is devoting himself to cookery, “the science to which I intend to addict the remaining years of my life! I have just now lying on the table before me, a receipt for making soupe à la reine, copied with my own hand.”
We don’t have Hume’s recipe for Soup à la Reine but there are references to Hume re-popularizing this white soup in Scotland during this time. Visitors to his home for dinner were often treated to dishes he’d prepared himself and were, by all accounts, quite good.
Recipes for Scottish Soup à la Reine or even white soup predate Hume, but not with the refinement Hume most likely brought with him from Paris. Pottage, or a thick meat stew, had been a staple of peasant life in Scotland since the 17th century, but it was nothing like the refined soups of the French court. By the 1800s, “white soup” was a standard part of most Regency formal meals.
Scottish Soup a la Reine generally started with a light broth (chicken or veal), a thickener (almonds, rice, or egg yolks), and cream. All of the cooked ingredients were pounded smooth or forced through a sieve. (Food processors and immersion blenders really are enlightened technology.)
In 1826, Scottish writer Christian Johnstone, who wrote under the pen name Margaret Dods, published a version of “Old Scotch White Soup, or Soup à la Reine” in her Cook and Housewife’s Manual. It purports to be a version of the one revived in Scotland by Hume which can be made with rice, vermicelli, or ground almonds along with chicken, nutmeg, and lemon.
You, too, can make a version of David Hume’s Soupe à la Reine which we can imagine Smith must have enjoyed on one of the few occasions the old friends saw each other after 1769. For a modern touch, we’re giving you a chicken soup, thickened with a little rice, pureed to a perfect texture, swirled with cream, and seasoned with nutmeg. Diners today might think of it as cream of chicken soup. We would think of it as a hearty but elegant soup for a rainy spring day.